In January the Hollywood Foreign Press Association  announced the award of a $2 million endowment to California State University Northridge to support the school’s acclaimed Department of Cinema and Television Arts. The grant is part of the Hollywood Foreign Press’ commitment to fostering excellence and diversity in film arts education. Similar HFPA grants have been awarded to educational institutions such as Los Angeles City College, USC School of Cinematic Arts and many others.

CSUN’s Department of Cinema and Television Arts has an international reputation for producing dedicated and talented entertainment industry professionals who recognize the value of hard work as they learn and continue to perfect their crafts. The department currently enrolls nearly 1,600 undergraduate students and 30 students in its graduate screenwriting program. Its alumni work in all aspects of entertainment media, from writing, producing and directing to manning cameras and having the final say in what project is made. Earlier this year, the entertainment trade magazine Variety listed CSUN as one of the top 30 film programs in the world. The Hollywood Reporter also listed CSUN on its list of the top 25 U.S. film schools.

On September 15, in recognition of the grants which have allowed for the awarding of 172 student fellowships to date and the upgrading of school materials including state of the art editing suites, CSUN celebrated the naming of the South Wing of Manzanita Hall, which houses the Department of Cinema and Television Arts, in honor of the Hollywood Foreign Press Association. 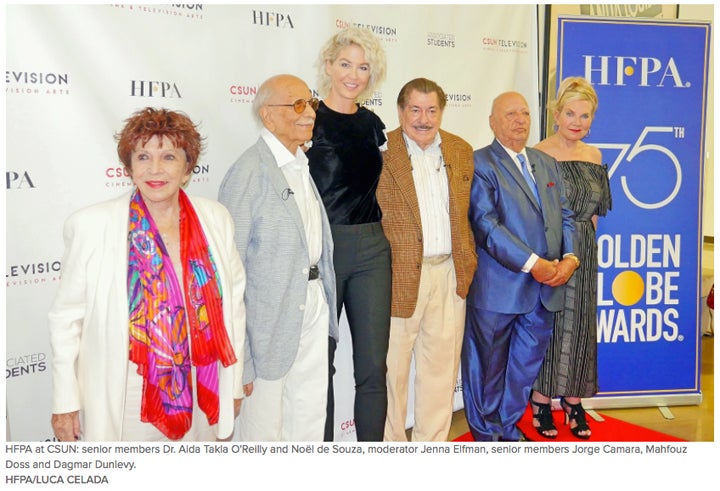 Northridge President Dianne F. Harrison welcomed guests and the HFPA delegation to campus and said: “We are exceptionally appreciative of the support and generosity that the Hollywood Foreign Press Association has shown CSUN over the years. Their support is a big reason why our film program is ranked among the best in the world. For more than 20 years, the Association’s commitment to empowering the filmmakers of tomorrow has borne fruit at CSUN. The association exposes global audiences to new voices, and its annual grant to our senior film projects reflects its dedication to expanding opportunities for diverse perspectives to be heard.

“The Hollywood Foreign Press Association has supported CSUN and its film program for more than 20 years,” said cinema and television arts professor Nate Thomas, head of the film program. “There is a lot of talk in the entertainment industry about diversity. For HFPA, it’s not just talk. The association and its members appreciate and respect the rich diversity of people that make up CSUN’s student body, and the students in our film program. It recognizes that our film students are the next generation of filmmakers, who will be telling the stories from a variety of perspectives to audiences around the world. The Association’s support ensures that diversity of visions is out there.” 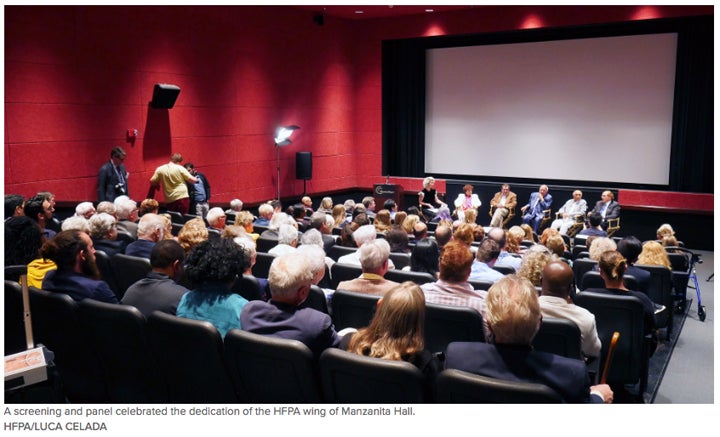 "We take pride in charitable giving,” noted HFPA president Meher Tatna.“In the past 31 years, the HFPA Trust has bestowed more than $29 million in fellowships and grants to film schools and non-profit organizations. This year once again CSUN is amongst them."

To celebrate the event CSUN and the HFPA sponsored a special screening of Golden Globe winner The Red Shoes (1948), whose UCLA Film and Television Archive restoration was funded by the Hollywood Foreign Press Association, The Film Foundation, and the Louis B. Mayer Foundation.

In addition to the formal building dedication ceremony, CSUN and HFPA hosted a special panel discussion with the participation of senior HFPA members, honoring this year’s  75th anniversary of the Golden Globe Awards. The panel was conducted by Golden Globe-winning actress Jenna Elfman (Dharma & Greg) who quizzed Aida Takla O’Reilly, Mahfouz Doss, Noël de Souza, Jorge Camara and Phil Berk on the Association’s early days and the origins of what has grown into Hollywood biggest party. “We are here today because of their invaluable contributions,” said Tatna introducing the panelists.  “We are thrilled that they will share their stories with you.” 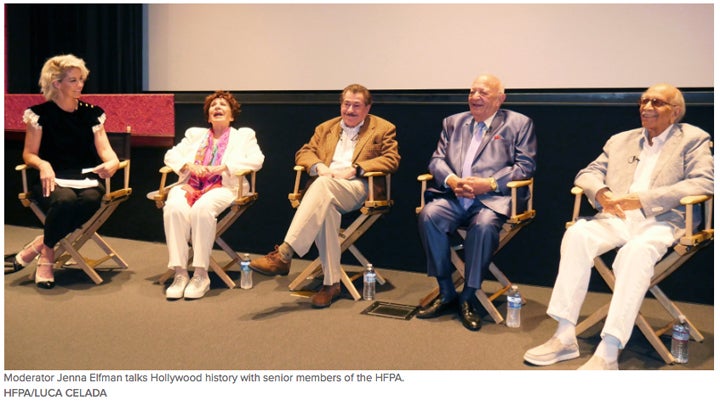 The lively conversation that followed kept the audience of students, alumni, and general public enthralled. Dr. Takla O’Reilly began by recalling how she had been a dean at CSUN when she divided her time between journalism and academia.

De Souza, who joined the HFPA in 1958, after working as both actor and correspondent for newspapers in India, recalled visiting the MPAA offices, then on Melrose Avenue, in order to screen films. Ms. Elfman reminded the audience that Mr. de Souza also had been in charge of calligraphy for the hand-written invitations which were sent out in the early days of the Golden Globes.

Mahfouz Doss, who joined the HFPA just one year after de Souza, in 1959, as Egyptian correspondent, remembered the days in which the Globes were handed out in the Ambassador Hotel’s Cocoanut Grove. The growth of the Globes since those days, Doss mused, is a testament to the growing importance of the foreign market in terms of overall Hollywood revenue. Something, he supposed, which just may have something to do with the work of the HFPA’s correspondents over the years.

Mr. Camara, a member of the Association since 1964, when he was dispatched to cover Hollywood by Mexico’s El Heraldo, also recalled the changes brought by the Globes being broadcast on network TV (NBC). And journalism itself has undergone several transformations, added Camara, since the days in which, in order to file deadline copy, he was instructed to go to the airport and ask Mexico- bound passengers to deliver typewritten articles. 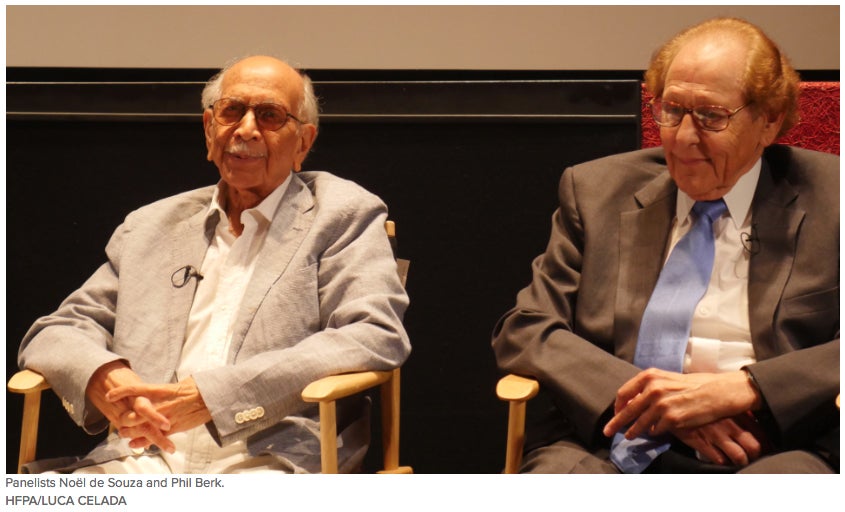 South African Phil Berk, who joined the association 40 years ago and went on to lead the HFPA as president eight times, talked about the evolution of the organization from a small band of foreign journalists to an integral part of Hollywood.

The conversation both enlightened and amused the audience. “I remember the event with Marilyn Monroe and Rock Hudson,” Doss recounted. “As a matter of fact, someone took a picture of me. It was me, Marilyn Monroe and Rock Hudson. The three of us together.” When Elfman asked if he still had the photo, Doss responded, “Yes, I still have it. I show it to people from time to time.” Elfman joked, “If you get pulled over by the police, just pull that out.”  As the room erupted with laughter, Doss replied, “That’s what I’ll do.”

When Elfman asked the group about their most memorable interview, de Souza recalled: “In the early days, we didn’t have these press conferences, so the studio publicists would get us one-on-one (interviews). I had one with Charles Bronson. I went up to his house and I remember he was teaching me how to do karate and jiu-jitsu, while we were munching on cookies.”  De Souza also recalled how the Foreign Language category was eventually added to the Globes in the 1960s with the support of the Laemmle brothers whose theaters showed many foreign films.

Jenna Elfman closed the proceedings by confirming: “You know how to throw a good party.” As a closing compliment,  Ms. Elfman also said that having first-hand knowledge, “the HFPA journalists always ask the best questions, the kind I could get from my aunt. I mean asked with genuine interest, not just glib lip service.”