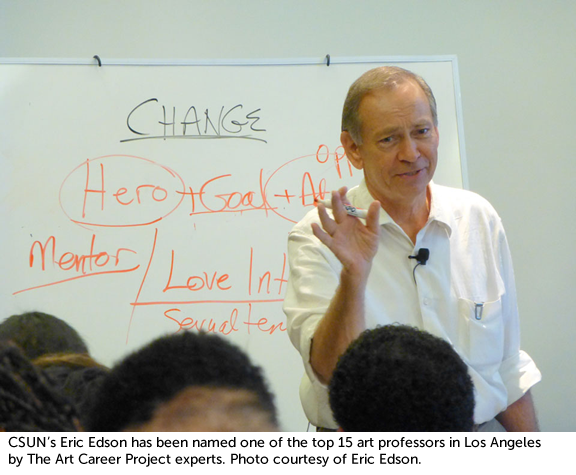 Eric Edson, professor and the director of the graduate program in screenwriting at California State University, Northridge, has been named one of the top 15 art professors in Los Angeles by The Art Career Project experts.

While admiring the work of artists and the impact their contributions have made to the art world, another type of art educators are at times overlooked. In various instances these people are those who not only influence the world through their own work, but also by preparing the next generation of young artists. Edson said he hopes to be such a person.

“In the beginning, someone you admire has to take interest in you. The seed must be planted. So it is that all professors work in agriculture,” says Edson, about the studio film director that inspired and taught him the most, David E. Miller. “Being acknowledged for doing what you love is heartening, of course, but it’s also quite humbling. We professors spend our lives seeking better ways to teach – and in the end the student who learns the most is the teacher.”

Edson has been a member of The Writers Guild of America since 1981. He is a recipient of The Samuel Goldwyn Award, the National Story Award and the Broadcast Education Association Festival of Media Arts “Best Festival” Award for his screenplay, “Spirit Walker.”

“Eric is a gifted teacher and has long been a beloved mentor and inspiration to our screenwriting students,” says Jon Stahl, the chair of the Department of Cinema and Television Arts. “His approach to feature-length screenwriting, detailed in his marvelous book, ‘The Story Solution: 23 Actions All Great Heroes Must Take,’ is standard-setting. I know for a fact countless CSUN students swear by his methodology. He deserves his honor, and we in CTVA bask in his reflected glory.”