Brent Geris holding a deck of cards, one of which is on fire. Photo courtesy of D.J. Hawkins

Up a set of stairs in a Studio City strip mall, there’s a small shop adorned with a grinning cartoon apple holding a magic wand over the door. Walking inside is like walking into a magician’s dream.

The walls are papered with pictures and framed playing cards signed by the likes of magicians Penn and Teller and actor Eric Stonestreet. Stands are filled with classic pranks like disappearing ink, gag vomit and hand buzzers, and there’s an entire wall dedicated to handkerchiefs of various sizes and colors. 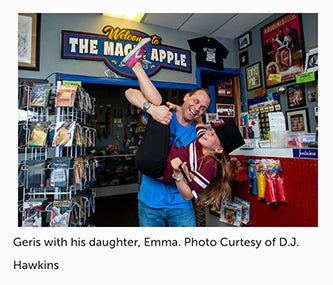 Inside The Magic Apple, proprietor and CSUN alumnus Brent Geris ’04 (Cinema and Television Arts) stands in front of the counter, surrounded by a crowd of customers. As his young daughter, Emma, jumps behind the counter for safety, he holds up a set of playing cards, and in the blink of an eye, sets the topmost card on fire. The blaze lights up the shop before sparking out, just as quickly as it started, without leaving a trace of ash or soot.

Geris, 42, was still a student at CSUN when he opened The Magic Apple in 2003, and he frequently offered to perform magic at his classmates’ and Sigma Chi fraternity brothers’ workplaces for free in order to spread the word about his shop.

“If you had asked me what I wanted to be when I was 10, I would have said magician,” Geris said. When asked why, he laughed and said, “‘Cause it’s awesome!” before going on to talk about how, in his opinion, there’s never enough magic shops open in the region.

With his CSUN degree in cinema and television arts, with an emphasis in electronic media management, Geris has one big advantage: The Magic Apple’s proximity to Hollywood. He partners with internationally renowned magician Tony Clark to rent out props and consult on magic in movies, TV and music videos. Recently, Geris’ students have included the likes of Gordon Ramsay, and he’s had a hand in shows such as “Matilda and the Ramsay Bunch” and designed sets for “Modern Family.”

Geris also coached actor George Lopez to perform magic in the 2017 music video for Train’s “Drink Up.” Contestants and production staff members for “America’s Got Talent” frequent his store as well, and he has coached actors for commercials for Staples and Aflac.

Becoming a successful small business owner, however, was an uphill climb.

“Those first 18 months were so slow,” Geris recalled. “Sometimes three days would go by without a single customer, but I tried to keep busy. I was on the internet — dial-up back in those days — emailing around, and I would put up posters, both legally and illegally. You weren’t supposed to put fliers up in the mall, but I did it.”

Sixteen years after opening his shop doors, Geris credited its survival primarily to the relationships he has built with customers — by teaching them how to use the magic props and tools they buy from his shop.

Teaching has always been the foundation of The Magic Apple, he said.

Geris’ wife, Elisa, is a kindergarten teacher, and Geris himself earned a credential to substitute teach. When he started his business, he focused on selling school supplies, with magic on the side — hence the name — because he thought notebooks and others supplies would sell better than magic cards. However, as The Magic Apple took off, Geris quickly realized that teachers usually buy supplies in bulk twice a year — at the end of summer break and after the winter holidays — while magic sells all year long.

As more of his customers turned out to be magicians, his store inventory shifted to all magic supplies, tricks and tools.

Geris has been a member of The Magic Castle — an exclusive, private club for magicians, located in Hollywood — since he was 21, five years before opening The Magic Apple. He still frequently performs there and donates to the Magic Castle’s Junior Magician Members program, for magicians age 13-20, and he gives club members a discount at his store.

“I know that feeling of being a kid and wanting to learn a trick that’s way above my head, but the guy at the magic shop was more interested in making a sale,” Geris said. “[At my store], it’s not a corporate thing — it’s me and a couple of guys.”

His students are primarily adults, but he offers formal magic lessons for all ages, sometimes with assistance from his daughters, Karly and Emma. Beginner magic tricks make up the majority of his sales, with card tricks and ball-and-vase tricks (the kinds of tricks Geris learned as a kid) the best sellers. 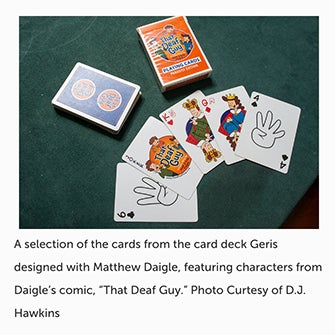 Geris designed a set of playing cards with cartoonist and CSUN deaf studies professor Matt Daigle, featuring characters from Daigle’s webcomic, “That Deaf Guy,” as well as drawings of hands signing the numbers on the cards.

“They were a big hit with the Deaf community,” said Daigle, who said he’d known Geris for eight years. “We met when our children were in first grade. Brent and I became friends very quickly because he was the only dad at school pick-up who could sign. He had taken ASL classes at CSUN and remembered many of the signs, even though he had not signed in a long time. That is pretty rare. Typically, if you don’t use it, you lose it — but being a magician, Brent has fantastic muscle memory.”

Geris had this advice for beginner magicians: Avoid YouTube, where you’re more likely to learn bad habits than how to actually do a trick. Practice, practice, practice, and once you’re ready to perform, relax and be ready to improvise based on your audience.

“Magic’s a serious art,” Geris added, “but don’t take the performance so seriously.”