Alumnus Brings Stories to Life On Screen for Amazon Studios 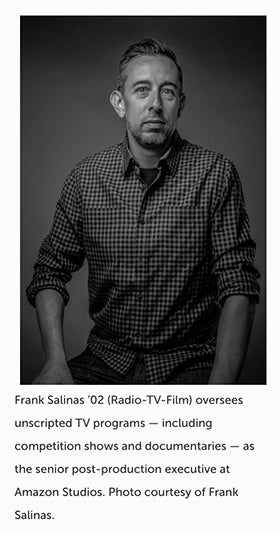 At a time when media and entertainment are ubiquitous and television streaming has gone from a new frontier to a Friday-night staple, it’s easy to overlook the intensive planning and effort that go into crafting the stories we see on our screens — whether on phones, tablets, laptops or flatscreen TVs at home.

Frank Salinas ’02 (Radio-TV-Film) has dedicated his career to delivering those compelling stories to our screens. In fall 2018, Salinas started a new post, overseeing unscripted TV programs — including competition shows and documentaries — as the senior post-production executive at Amazon Studios. Salinas helps ensure that the TV series he handles are of the highest quality before they’re displayed on screens, as well as ensuring that those programs are accessible on multiple platforms.

“We need to make sure we’re creating high quality dynamic files, visually and audibly speaking, that will translate across a wide variety of platforms from theaters to cellphones and airplanes to tablets,” he said.

Part of Salinas’ job is specifying the programs’ delivery specifications, or the technical requirements necessary for distributing media across platforms. That includes file components, audio configurations and subtitles. It takes a lot of very talented people across varying departments to localize programs and content both in regards to subtitles and dubbing in more than 30 different languages, he said. “By next year, it’ll be closer to 40 languages, which is mind-boggling,” he said.

Working at Amazon Studios, a relative newcomer in the TV game, is both a thrill and a challenge, Salinas said.

“We’re essentially building a studio from scratch,” he said. “So, it gives us a lot of leeway as far as being able to pave the way for what our workflow is going to be and what programs we’ll be accepting. Salinas currently works in Amazon’s Santa Monica office, until the new Amazon Studios campus is built in The Culver Studios later this year.

Amazon Studios creates and distributes OTT (over-the-top) media services, such as streaming — which, unlike cable and satellite TV that have been tested and honed for decades — is much newer and prone to more trial-and-error, he said.

“Not only are we dealing with a brand-new studio, but we’re also dealing with a whole, brand-new way of transmitting TV,” Salinas said. Though TV streaming has embedded itself into the modern lifestyle, it has only been around since the mid-2000s, pioneered by services such as Netflix, Hulu, Apple TV and Amazon Video.

Now in a position to explore new projects with the latest innovations in media technology, Salinas said much of his ability to do so stems from his past experience working across a variety of platforms. 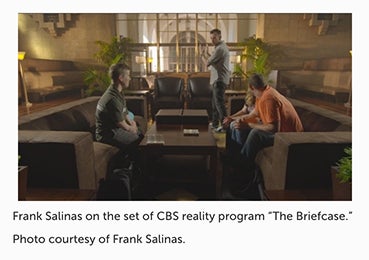 Before Amazon, he already had built extensive experience in both scripted and unscripted television. His career as a producer began at Los Angeles MTV News Bureau, where he encountered the pressures and intricacies of unscripted work for the first time as he covered pop culture and entertainment news, as well as politics, current events and issues facing young adults, such as AIDS, drug abuse and addiction.

When Salinas was a young producer at MTV, the cable channel covered the 2005 civil trial of Michael Jackson, which drew more than 200 reporters from all over the globe.

To get the best possible report, Salinas said, he had to choose between covering the story from the courthouse or Jackson’s Neverland Ranch. Trusting his gut, he chose the latter.

“We were able to get boots on the ground at Neverland Ranch, where no one else was, and do actual reporting,” he said. “In the long run, I think it was the better story and ultimately helped connect our viewers to the importance of the story from relevant facts.”

After kickstarting his career at Viacom, Salinas has worked on live awards programs, including The Golden Globes, The Grammys and the MTV Video Music Awards. He also has served as the supervising producer for reality competition shows, such as NBC’s “S.T.R.O.N.G.” and Netflix’s “Ultimate Beastmaster,” and for the Netflix sports documentary “Fearless,” nominated for outstanding sound, editing and motion design at the Sports Emmys.

In his 20 years in the industry, including work he did while still attending CSUN, Salinas has produced programs for MTV, The CW, TruTV, ABC, USA, VH1 and Netflix. At Amazon, he recently helped on”Lorena,” a four-part docuseries from executive producer Jordan Peele about the controversial case of Lorena Bobbitt that has been well-received by audiences since its premiere at the 2019 Sundance Film Festival.

A member of the Producers Guild of America for more than 10 years, Salinas didn’t know he wanted to be a producer until he got hands-on experience in TV and film production at CSUN.

“I thought I wanted to be an editor,” he said. “[But] I found that although it was very satisfying being able to create a story — and I love being able to intertwine music — it was the producer that was sitting behind the editor that really helped craft the story.”

He also said learning from CSUN professors such as Mary Schaffer and Karen Kearns in the Department of Cinema and Television Arts left a mark on him. 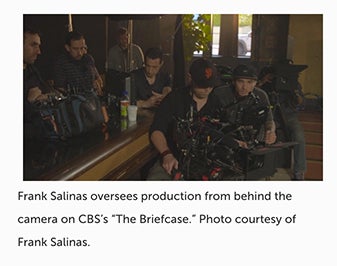 “I remember [their] lectures would always focus on content, and that content was going to be king,” he said. “That stuck with me because, honestly, right now, if you own content of any sort, or if you’re creating content, there are so many outlets and so many places that will buy, license or help distribute that content.”

Salinas continues to strengthen his connection with his alma mater. At Amazon Studios, he works with John Lynch, head of production at Amazon, who also teaches electronic media management classes at CSUN.

Outside of work, Salinas spends most of his time as a family man with his wife and two children, fifth-grader Layla and kindergartener Nixon. Salinas encourages his kids to learn about the world by experiencing it themselves, just like he did.

“We try and do some traveling wherever we can,” he said. “That’s been my big thing for them — it’s to get them outside and get them learning from experience and culture.”

Salinas advised current students who aspire to explore the new ways audiences can access media and entertainment to be open to experiences as they come.

“Come in with an open mind and, honestly, be ready to start from the bottom,” he said. “It’s the best place to learn,”