A siren blares in the distance, prompting Ellis Boyd “Red” Redding (Morgan Freeman) to look up at the grey skies above the walls that hold him and his fellow inmates captive. Then, we cut to a stark white prison bus winding its way down the wet road leading to Shawshank State Penitentiary. In the same take, we soar high above those walls, gliding above the inmates herding toward the gates. The only sound: The royal blue flag of Maine snapping in the harsh wind.

Hovering over the scene in a helicopter, watching vigilantly on a small monitor, Michael Kelem’s camera rolled, capturing the long opening shot that set the scene for the critically acclaimed feature film “The Shawshank Redemption.” 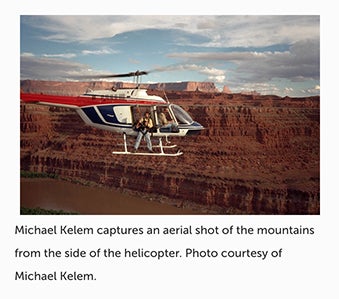 By the time Kelem ’19 (Radio-TV-Film) worked on the Academy Award-nominated 1994 drama, he already had worked in the industry for years as an aerial cinematographer — a job that involves capturing footage from the air by helicopter to establish a setting, capture the main action from above or create background elements for visual effects.

Now with more than three decades of experience, Kelem has filmed footage for blockbuster feature films including “Mission: Impossible,” “Godzilla,” “Captain America: The Winter Soldier,” “Jurassic World” and the recent “Captain Marvel.” He also has worked on wildlife documentaries such as BBC’s “Frozen Planet,” “The Hunt” and “Planet Earth,” for which he and the rest of the cinematography team received the Emmy for Outstanding Cinematography for Nonfiction Programming in 2007 .

Kelem first set foot on the CSUN campus in 1976, but his final graduation walk — diploma in hand — didn’t happen until May, 43 years later.

When Kelem first began his journey at CSUN, he was eager to take classes in his chosen major, Radio-TV-Film. This wasn’t a decision that pleased his parents, who thought a film degree was inferior to getting training for a trade, such as plumbing, Kelem said. But his heart was in the film industry and in camera work.

For a few years, he kept up a steady pace toward his bachelor’s degree, completing a handful of credits at a time, striving to do his best at his studies as he worked to support himself through college. 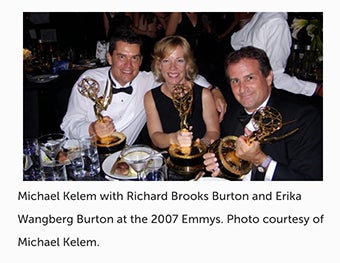 However, in 1982, the College of Arts, Media, and Communication restructured and renamed the major to Radio-TV-Broadcasting, which meant the program focused more on honing the skills needed for radio and television broadcasting, such as learning FCC regulations. It wasn’t what Kelem envisioned for his own educational journey, he said.

Deciding the refocused program was not going to help equip him for the film industry, Kelem withdrew and put his studies on indefinite hold to pursue learning on his own. After all, with his senior film project done, he had extensive experience. So, he worked his way up the ladder of the camera department for various companies by doing ground work as a production assistant or a camera assistant on sets for commercials and music videos, including Michael Jackson’s Beat It” and the infamous 1984 Pepsi commercial in which Jackson’s hair caught fire.

Kelem aimed to become a director of photography — the chief of the camera and lighting departments on a film set. But a seminar he attended that introduced a variety of emerging filmmaking technologies caught his interest: Kelem learned about the gyro-stabilized camera system, which allowed filmmakers to move their cameras in new ways and tell their stories from new perspectives — the sky was, quite literally, the limit.

“I fell in love with the technology, and I liked the things that it produced,” he said.

After mastering the gyro-stabilized camera in 1986, he first worked as a camera assistant and as technical support for operating the system. Then, in 1992, his career as an aerial cinematographer took off, beginning with “Cliffhanger,” starring Sylvester Stallone.

On any given film, Kelem works off a director’s shot list and the director of photography’s technical specifications. He takes his camera up on a helicopter to get a bird’s-eye view of the setting, the action and the story of a scene, providing the director and editor additional options to build the final cut of a film.

From Blockbusters to Bachelor’s Degree

Throughout his career, Kelem has worked with Hollywood’s elite to see dozens of big-budget titles from start to finish. But in the midst of the hectic work, there was one major, unfinished project that lingered in his mind — his college degree.

CSUN had stayed connected with Kelem through Jarrod Fasching, the assistant director of development for what is now known as the Mike Curb College of Arts, Media, and Communication. In 2018, Fasching visited Santa Barbara and called some alumni who lived in the area — one of them was Kelem.

In their conversation, Kelem expressed his reasons for leaving the first time, but that he hadn’t closed the door on completing his degree. Soon, Fasching connected the Department of Cinema and Television Arts with Kelem, who was pleased to know that the major now housed a program dedicated to film production and, best of all, that he could carry forward any units he’d accumulated since 1976 between his classes from CSUN and community colleges.

It was time, Kelem said, to cross that finish line. 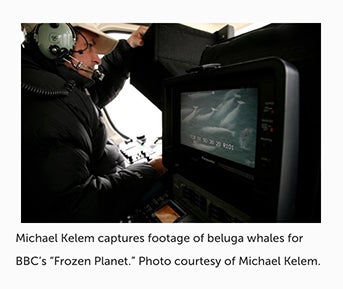 It turns out I had very few credits left to do,” he said. “And I thought, ‘well, this is something that is left unfinished, and I’d like to finish it. I’d like to have that degree.'”

In fall 2018, Kelem enrolled for the three remaining elective classes he needed to earn his bachelor’s degree, including one on the history of American cinema in the 1970s, which he particularly loved. Taking mostly online classes, he managed to carve out time between production work to complete his requirements.

“[Kelem] knew a degree wasn’t required for his career success, but he wanted to show he could follow through,” Fasching said. “He even took the Upper Division Writing Proficiency Exam, in his early 60s!”

On May 19, Kelem finally walked the graduation stage on the lawn of the Delmar T. Oviatt Library, to claim a diploma that had been waiting for him for more than 30 years.

If one were to film the occasion from the sky, the audience would see thousands of students from Mike Curb College in their caps and gowns. The camera might zoom in on Kelem, sitting among them and grinning at the red and white commencement program in his hands.

“In the commencement book, I looked up my major,” he said, laughing. “So there’s Bachelor of Arts in Cinema and Television Arts, which I thought I was transferring into, but then I didn’t see my name there and looked a couple pages over. And there’s me and my own category, which is Bachelor of Arts in Radio-Television-Film, because that’s the one that I continued.”
The graduation ceremony evoked more emotion than he expected, Kelem said.

“It felt very satisfying to work all these years and then also say, ‘I have a degree,’ because I’ve never given up on the learning part,” he said. “When you’re walking [onto the stage], you feel like you’ve accomplished something. You feel like, ‘Oh, this is what I would have done 30 years ago.'”

With a bachelor’s degree under his belt, Kelem said he plans to continue his educational journey by pursuing a master’s degree and delving deeper into film analysis — a new passion he discovered after returning to CSUN.

He also plans to continue working as a freelance aerial cinematographer, with a number of projects already queued up. Several include filming wildlife, such as aerial footage of polar bears for a Netflix production. He’s also credited as the aerial cinematographer for Disney’s upcoming “Jungle Cruise” and the third installment of the “Jumanji” franchise. 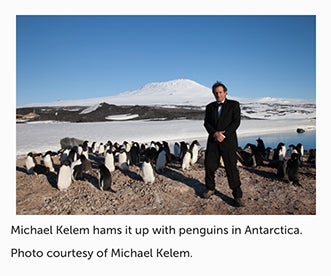 Even after more than three decades of aerial work, Kelem said he still finds a thrill in the process.

“Nearly every time, you go, ‘I like flying, I like seeing things from the air, I like … getting a different perspective,'” he said. “It’s not the worst thing in the world.”

In a typical set-up for a shoot, it’s just him and the pilot.

That can make capturing footage difficult at times, Kelem said. When shooting for the BBC nature programs, where he filmed in places like Botswana and Antarctica, he had to rely on local pilots. “They’re very good at spotting animals, but they don’t necessarily know how to move a camera,” he said.

But when he gets to work with a pilot that he knows well and with whom he shares a vision, magic happens, Kelem said. 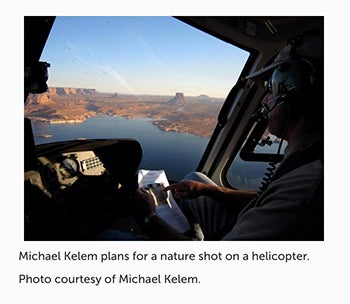 “The most gratifying part of the work is when you discover and create stuff in the air that nobody asked for, but you are the only person that can discover that,” he said. “So, you have to keep your eyes open at all times and be ready to roll.”

Besides watching the monitor that displays the image visible to the camera’s lens, he keeps his peripheral vision alert to see what might be coming up in the space and get the pilot to adjust the helicopter and the camera.

For the “Shawshank Redemption” opener, Kelem kept his eyes peeled for any element that could add interest to the scene. In this case, the Maine state flag was a surprise.

“We just happened to have been able to take advantage of this flag pole up high on a roof and have it wipe through the frame,” he said. “They added a sound effect of the flag rippling, because they thought that was a great moment that we got.”
CTVA
© California State University, Northridge
18111 Nordhoff Street, Northridge, CA 91330
Phone: (818) 677-1200 / Contact Us