The senior film project "Diana Leigh" which screened at the 2014 Senior Film Showcase this past May will be awarded a 'Jury Award' to CTVA 2014 alum Stephanie Hoston in the African American Filmmaker's Category at the 20th Annual Directors Guild of America Student Film Awards Ceremony. This will take place at 7:30pm, Thursday, November 6th at the DGA National Headquarters, 7920 Sunset Blvd., Hollywood, CA 90046.  Congrats to all the faculty and staff that had a part in making this film a success.

Logline: In the 1960s, a young black woman aspires to become a professional singer, confronting both racial prejudice and the demons from her past.

Recent California State University, Northridge graduate Stephanie Hoston was preparing for a night out when she got the call a few weeks ago. Her senior film project, the culmination of years of hard work as a CSUN film student, was selected for an honor from the Directors Guild of America (DGA). 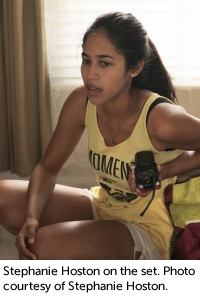 Hoston had won the Jury Award for Best African American Student Filmmaker in the 2014 DGA Student Film Awards in the west region for her film, “Diana Leigh.” She was the only undergraduate filmmaker to receive recognition from the guild.

“I was shocked when I received the call,” said Hoston, who graduated from CSUN with a bachelor of arts degree in cinema and television arts this past spring. “They always tell you not to make your first film a musical, with a child, a period piece or about a traumatic topic. ‘Diana Leigh’ had everything they tell you not to do, and yet we still won this honor. It’s amazing.”

“The Directors Guild of America Student Film Awards is a major film industry accolade, second only to the Student Academy Awards,” Thomas said. “Stephanie Hoston is one of our most recent grads and was a very talented student. She was always seeking out faculty and yearning for knowledge. I attended the gala and was touched to see our Stephanie honored along with filmmakers from USC, AFI and Chapman University. Her film, ‘Diana Leigh,’ was the only undergraduate one honored. I think that speaks well of our program and the talent of our students.”

Hoston, 23, of Van Nuys, originally came to CSUN with plans to study acting, but wanted the challenge of learning the craft of filmmaking, from screenwriting to directing.

“There aren’t that many women making movies,” she said. “I know I can do it. Just like the guys, I have stories to tell. I can tell them from a unique perspective.”

“Diana Leigh” is the story of a young black woman in the 1960s fighting for her dream to sing, while overcoming a dark past and a racist world resistant to change.

Hoston began working on the screenplay for her film while appearing on stage in CSUN’s production of “Spring Awakening.” That play, the story of teenagers discovering the inner and outer tumult of sexuality, inspired the story of “Diana Leigh.”

“I wanted to bring that kind of drama and conflict to my film,” she said, referring to “Spring Awakening.” Hoston added she decided to make her film a musical because “I knew that if I was gong to be working on something for the next two years, then it needed to be something I love.”

She said her film would not have been possible without the support of the film department’s faculty, in particular acclaimed veteran film director Donald Petrie, a CSUN alumnus known for directing “Miss Congeniality,” “How to Lose a Guy in 10 Days” and “Grumpy Old Men.” Petrie spent much of the past academic year serving as a mentor to the five students whose projects were selected for production and inclusion in the Senior Film Showcase.

“He would take his time with me and the other senior filmmakers, spending hours on the phone with us — going over our shooting plans, every detail about how we were going to tell our story,” Hoston said. “I learned so much from him and the other faculty at CSUN. It’s their faith in me and their support that gave me the confidence to know that I could make the story I wanted to tell with ‘Diana Leigh,’ despite it having everything in it that people say you shouldn’t have when you make your first movie.”

Since graduation, Hoston has been concentrating on her acting career, in part to gain experience that she hopes will make her a better director in the future.

“I found that because I was an actor myself, I could relate to my actors more easily, and I think I was able to communicate what I wanted from them better,” she said. “I do want to direct again. Ultimately, that’s my goal. In the meantime, I am doing what I can to learn more about the business.”

She’s also spending a lot of time entering “Diana Leigh” in film festivals around the country.

“To sit there while a real audience watches your movie and you can see their reactions, it’s just amazing,” she said. “It’s an affirmation of why I wanted to become a director.”