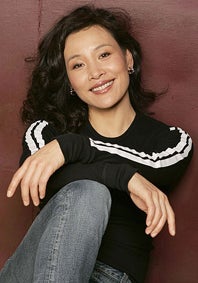 Born into a family of doctors. Educated in China at the Shanghai Film Academy and the Shanghai Institute of Foreign Languages. Discovered by veteran Chinese director Xie Jin while observing a filming with a school group.

Her performance in Little Flower won China's Best Actress award, and resulted in the Chinese press dubbing her "The Elizabeth Taylor of China" for having achieved top stardom while still a teenager.

Came to US to attend college in 1981, first at the State University of New York at New Paltz, later at California State University at Northridge. Had a succession of small parts in movies and TV, with first break coming in 1986 when, in the true tradition of Hollywood legend, Dino DiLaurentis discovered her in the Lorimar parking lot and cast her in Tai-pan. The film bombed, but led to Chen being cast as the ill-fated Empress in Bertollucci's The Last Emperor, which won critical acclaim. This, and her role as enigmatic mill owner Josie Packard in the cult TV series "Twin Peaks," are her best-known roles in the West.

Joan made her directorial debut with the acclaimed theatrical film Xiu Xiu, a film banned in its homeland of China. She went on to direct Autumn in New York starring Richard Gere and Winona Ryder.