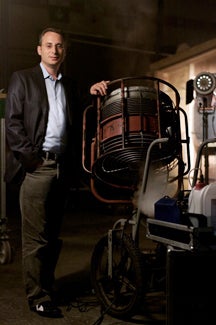 Glenn Gainor (BA 1995) launched his career in the film industry when he wrote and produced an independent pilot that led to an offer to write for an ABC series, but Gainor chose to pursue his career in producing.

Glenn is currently the Senior Vice President in charge of physical production for Sony Pictures’ Screen Gems, a position he has held since January of 2007. Gainor executive produced the thriller Vacancy for Screen Gems as well as recent box office hits Prom Night, Quarantine, and Obsessed.

As quoted in Kodak’s In Camera Magazine, Gainor says, “We are committed to reviving the tradition of producing films in Los Angeles, where we can draw upon a deep pool of talented people who are happy to be working at home. We are building a family with many people collaborating with each other on different projects.” In the article, Gainor also cites the unique support infrastructure in the city, including stages and the backlot at the studio, equipment rental companies, labs and post-production facilities.

And in the PGA’s Produced By Magazine article entitled “Reviving the Spirit of Old Hollywood,” Gainor says, “Part of the magic of Hollywood in the early days was that every studio was like a family. The same people worked together on different projects. We don’t have writers, directors and actors under contract today, but we are rebuilding the collaborative spirit”.

Gainor is the 2009 recipient of the California on Location Signature Award, given in appreciation for his efforts in preserving California’s film industry. Gainor also served as keynote speaker at the COLA Awards.

Gainor served as line producer on A Rumor of Angels, as well as the critically acclaimed Panic, directed by Henry Bromell. Gainor co-produced George Hickenlooper’s The Man from Elysian Fields, as well as Happy, Texas. Gainor has also produced for the stage, teaming with Ovation Award winning director Andy Fickman for the musical Sneaux.