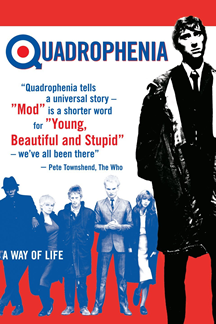 Set against the soundtrack of The Who's 1973 concept album Quadrophenia, Phil Daniels plays working-class Jimmy, a drug-induced Mod who hates his job and is misunderstood by his parents. But by night, he comes alive with his pills and his scooter-riding friends. The film also features Sting, from the rock group The Police, in one of his first film roles.