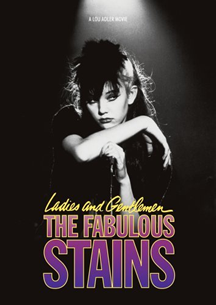 Ladies and Gentlemen, the Fabulous Stains

A favorite of the Riot Grrrl movement, this film stars Diane Lane as Corinne Burns, a troubled teenager living in a dead-end town. Bewitched by the punk scene, she, forms a band called the Stains with her cousin (Laura Dern) and sister (Marin Kanter). They quickly develop a devoted fan base of equally rebellious girls. Paul Cook and Steve Jones of The Sex Pistols, Clash bassist Paul Simonon, and Fee Waybill of The Tubes are featured in the film.