to this amazing engagement opportunity!

Hosted by The Students on the Move Program from the National College Resources Foundation.
Read more
ASLN is proud to present "Color Design" an exclusive and limited mini-workshop with veteran Color Designer, Ms. Nancy Ulene!
This incredible series will consist of five (5) workshop sessions and will be offered for qualifying students wanting to get an in-depth look at and explore a possible career option as a "Color Designer" for 2D Animation. Assignments will be issued and required from participants providing students with actual, industry-standard portfolio pieces upon completion of this workshop.

What is color design? By the end of this workshop, you'll have a working understanding of this niche animation craft. You'll learn about Color Theory, Palettes, Lighting, and much, much more with this enthusiastic and experienced artist.

What: Animation Color Design Workshop
When: 5 Saturdays - October 23, 30, November 6, 13 and 20
Time: 10:00 AM to 12:00 PM
Where: Virtually through Zoom. Students selected to participate will be notified. A link will be provided to the 20 students who qualify to attend this workshop.

Interested? Well, you must be able to fully commit to attending each of the workshops and complete all of the assignments. Still can? Are you sure? Then please fill out the Google Form below. 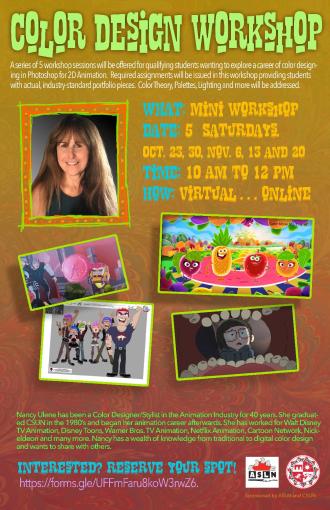 Guest Speaker: Ryan Quincy HOW TO CREATE YOUR OWN SHOW

Ryan Quincy is best known for his work as animation producer/director on the long-running animated series SOUTH PARK, for which he won two Emmy Awards in 2008 and 2009 and was nominated in 2010 and 2011, all for Outstanding Animated Program. Quincy went on to create IFC's animated series OUT THERE, for which he also voiced the lead role of Chad. He also created and executive produced Disney XD's FUTURE-WORM! He's developed projects at Netflix, Nickelodeon and Fox and is currently co-executive producer and animation director for HBO Max's upcoming adult animated series, TEN YEAR OLD TOM.

As the CSUN community transitions back to campus, we are here to support you!
Please see the information below to reach the Department of Art.

For Art Advisement, students can request an appointment by emailing Abraham Zapata, Monday thru Friday.
Please include a CSUN student ID number and use a CSUN email.