A CSUN alumna, Baca received her Bachelor’s in 1969 and Master’s in 1980.  Her inspired career, noted for its educational and community-based art methodologies, is a lesson on the integration of ethics and creative expression.   Baca has worked at UCLA’s Cesar E. Chavez Department of Chicana/o Studies since 1996.  She founded the first City of Los Angeles Mural Program, which evolved into the community arts organization known as the Social and Public Art Resource Center (SPARC).  She continues to serve as the artistic director at the UCLA@SPARC Cesar Chavez Digital/Mural Lab, employing digital technology to co-create collaborative mural designs. 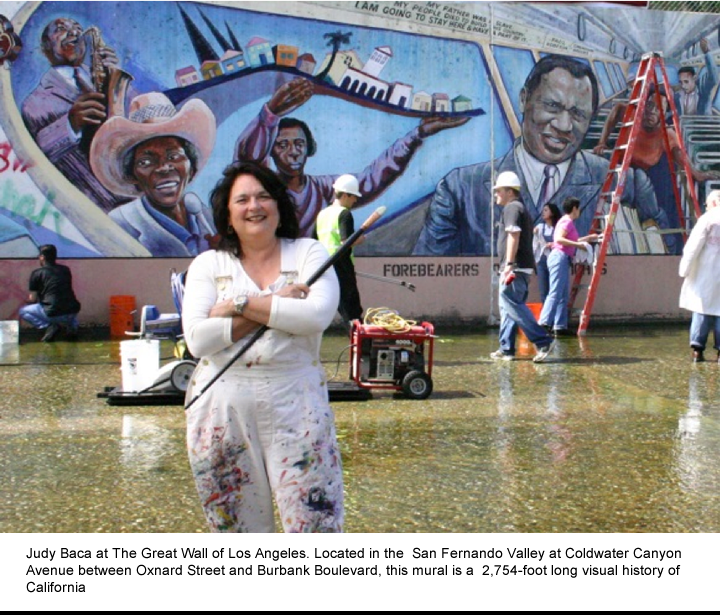 “I want to produce artwork that has meaning beyond simple decorative values. I hope to use public space to create public voice, and consciousness about the presence of people who are often the majority of the population but who may not be represented in any visual way. By telling their stories we are giving voice to the voiceless and visualizing the whole of the American story while creating sites of public memory.”   Judy Baca

Baca is at the top of a distinguished list of artist creators.  What sets her apart from many other artists is an inspired ability to teach and a creative pursuit of relevancy in developing educational and community based art methodologies. Through a lifetime of achievement, Baca has stood for art in service of equity for all people.  She is a lesson for us on the integration of one’s ethics with creative expression, never compromising and never flagging in her devotion to a practice that is committed to public education for all and to pedagogical process for its participants.  Baca is a world-renowned painter and muralist, community arts pioneer, scholar and educator who has been teaching art in the UC system since 1981 (beginning at UC Irvine and from 1996 to today at UCLA Cesar E. Chavez Department of Chicana/o Studies.)  She was the founder of the first City of Los Angeles Mural Program in 1974, which evolved into a community arts organization known as the Social and Public Art Resource Center (SPARC) which was has been creating sites of public memory since 1976.  She continues to serve as its artistic director and focuses her creative energy in the UCLA@SPARC Cesar Chavez Digital/Mural Lab, employing digital technology to co-create collaborative mural designs.

Baca’s public arts initiatives reflect the lives and concerns of populations that have been historically disenfranchised, including women, the working poor, youth, the elderly and immigrant communities. Throughout Los Angeles and increasingly in national and international venues, SPARC’s projects have often been created in impoverished neighborhoods that have been revitalized and energized by the attention these murals have brought and the excitement they have generated. Underlying all of SPARC’s activities is the profound conviction that the voices of disenfranchised communities need to be heard and that the preservation of a vital commons is critical to a healthy civil society.

Baca’s work channels the creative process of monumental mural design to develop models for the transformation of both physical and social environments in public spaces. And they are monumental, both in space and time: The Great Wall of Los Angeles is ‘tattooed’ along a flood control channel in the San Fernando Valley and employed over 400 at risk youth and their families from diverse social and economic backgrounds working with artists, oral historians, ethnologists, scholars, and hundreds of community members.  It is currently the world’s longest mural, at 2,740 feet long.  The Great Wall depicts a multi-cultural history of California from pre-history through the 1950’s. It was begun in 1976 and plans are underway for its next four decades of evolution.

Baca’s murals are as much about the process of how they’re made as they are about the end result. She begins as an artist from the awareness that the land has memory that must be expressed and creates art that is shaped by an interactive relationship among history, people and place, that marks the dignity of hidden historical precedents, restores connections and stimulates new relationships into the future.  Baca’s murals and public artworks focus on revealing and reconciling diverse peoples’ struggles for their rights and affirm the connections of each community to that place. She gives form to monuments that rise up out of neighborhoods, rather than being imposed upon them. Together with the people who live there, they co-create monumental public art, places that become “sites of public memory.”

Baca is one of the most remarkable public artists for social transformation in modern American history.  One of her most indelible quotes is: “Collaborative art brings a range of people into conversations about their visions for their neighborhoods and their nations. Finding a place for those ideas in monuments that are constructed of the soil and spirit of the people is the most challenging task for public artists in this time.”

In 2010 she completed the Cesar Chavez Memorial at San Jose State University, and the Robert F. Kennedy monument at the Ambassador Hotel site (the site of Kennedy’s assassination), which is now the LAUSD K-12 RFK Community Schools.  She is currently working on a 60ft digitally painted mural for the Richmond Civic Center in Northern California and an interactive digital mural for the Miguel Contreras Learning Complex a social justice high school located in downtown Los Angeles.

----Taken from Nina Simons, co-founder of the Bioneers biographical sketch of Judy Baca.  The Bioneers are engaged citizens from all backgrounds and fields who focus on solving our world’s most urgent problems within a framework of interdependence by networking scientists, artists, scholars and others internationally to work together.