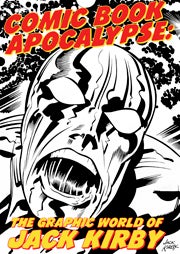 Famed comics artist Jack Kirby, whose work launched The Avengers, X-Men, Captain America, and the Marvel Universe, is the focus of an exhibition at the California State University, Northridge Art Galleries. While focusing on Kirby’s later work, from about 1965 on, the exhibition will document his entire career, which lasted more than half a century and involved almost every major publisher in comic books. Comic Book Apocalypse is curated by Professor Charles Hatfield, founder of CSUN’s popular “Comics and Graphic Novels” course and the author Hand of Fire: The Comics Art of Jack Kirby.

About 100 pieces of Kirby’s work will be displayed and a roughly 200-page, full-color catalog will accompany the exhibition.

Purchase the poster at $10 each