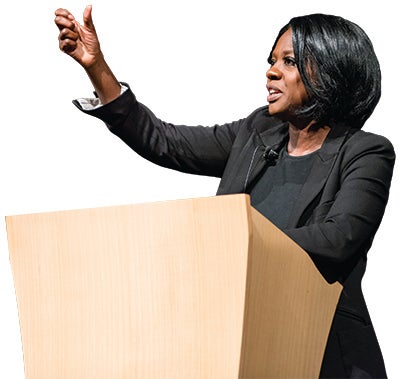 Just days before she won the Oscar for Best Supporting Actress for her work in Fences, Viola Davis headlined CSUN’s Black History Month 2017 with a sold-out Big Lecture presented by Associated Students on Feb. 8 at the VPAC. Approximately 1,600 students, faculty and staff filled the Great Hall, where Davis delivered a powerful and moving speech. “‘My name is Viola Davis, and I am a hero,’” Davis began, drawing applause and whistles from the audience. “I’m not a hero with a cape, or a golden lasso or a boomerang. I’m just your ordinary girl, living an extraordinary life with an extraordinary calling.” Davis made history as the first African-American woman to win the prime-time Emmy for Outstanding Lead Actress in a Drama Series for her performance on How to Get Away with Murder. During the evening, Davis spoke candidly about her career, overcoming adversities in her life and the “call to adventure.” Davis recalled that most of her earliest memories of Central Falls, R.I.,were of being very poor. Her mother and father grew up under the heavy boot of Jim Crow, never completing their high school diplomas. “When you’re poor, there are trickle-down effects,” said Davis. “So, I grew up with the violence, the alcoholism. That was my existence.” The narratives of African-American women in Hollywood have been so limited, she said. She described her feeling of confidence when she learned that her TV character, Analise Keating on How to Get Away with Murder, was described as a sexy, dark-skinned woman, who was hard, strong and intelligent. “The privilege of a lifetime is being who you really, truly are,” Davis said. “It is the power of owning your story — the failures, the successes, but also the joy and the beauty.”