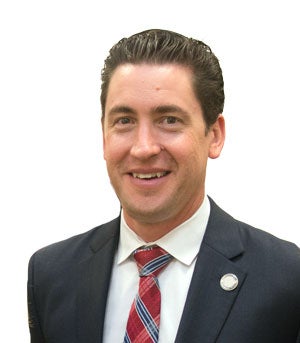 Tony Pennay ’09 (Teaching Credential) is surrounded by books — anthologies of great speeches, tales of war, portraits of women and men who shaped U.S. and world history. The volumes that occupy more of his thoughts these days, however, are housed 3,000 miles away — in the National Archives in Washington, D.C.: the Declaration of Independence. The Constitution. The Bill of Rights. The Emancipation Proclamation. As the chief learning officer for the Ronald Reagan Foundation and Institute in Simi Valley, it’s no surprise that Pennay — a California native, father of three, passionate reader and writer, and seasoned English teacher — is driven to help create informed young citizens. What might surprise visitors to the institute (at the Reagan Presidential Library and Museum) and fellow educators is the 38-year-old’s depth of knowledge about civics education. “Our mission is to cultivate citizen leaders — thoughtful, engaged citizens,” he said. “Every program, regardless of when a student comes to us or what program they participate in, they get a piece of that larger puzzle.” Pennay has served on the advisory board for the California K-12 Civic Learning Task Force, convened in 2014 by state Chief Justice Tani Cantil-Sakauye and state Superintendent Tom Torlakson.

This year, Pennay said, the task force is piloting civic learning partnerships in six counties, including Los Angeles. “Especially after this election cycle, [civics] is becoming a hot issue,” he said. “I got letters and emails from associations around the country saying, our work is more important than ever! “The approach we’ve taken to education in this country for a couple of decades is — math and literacy are important. And they are, but so is social studies education,” he continued. “The historic purpose of education in this country is around helping to create those informed citizens. Jefferson founded the University of Virginia. Franklin founded Penn. The framers of the country and [of the] founding documents knew that in order for this form of government to work, you have to have informed citizens.” Pennay joined the library and museum in 2010, before the 2011 centennial celebration of Reagan’s birth. The reluctant extrovert grew up in San Jose, studied literature for his bachelor’s degree and then served with Teach for America. After two years, he went back to school and earned his master’s in creative writing. He returned to teach English, this time at the private, K-8 Jewish school, Sinai Akiba, on LA’s Westside. “The resources were so vast,” he said. “It was great for me to grow as a teacher, and I went to a lot of conferences but eventually, I thought — I love these kids and these parents, but they’re going to do OK. With or without me as a teacher, they’re going to do OK.

I wanted to get back into public education — my passion was for public education. To do that, I needed to get my credential.” Pennay chose CSUN for economic and logistical reasons: He taught on the Westside and lived in Valencia — CSUN was on his way home. “Lucky for me that I did, because I had Kathy Rowlands as a teacher — and she quickly became a mentor,” he said of the professor in the Department of Secondary Education. “I enjoyed her methods class. Even though I had been teaching already for seven years, I learned so much in her class about what it meant to be a teacher, what it meant to be a professional, and what it meant to continue to push yourself in terms of how you instruct students and engage them.” A few years later, Pennay followed his mentor’s directive and spent the summer of 2008 in the first cohort of CSUN’s Writing Project, which helped lead to a job opportunity at the Reagan Library. “Following powerful, influential mentors has always been important to me,” he said of Rowlands and his experience at CSUN. “Even though I had taught for seven years, I knew I could get better. I needed to be better.” —Olivia Herstein