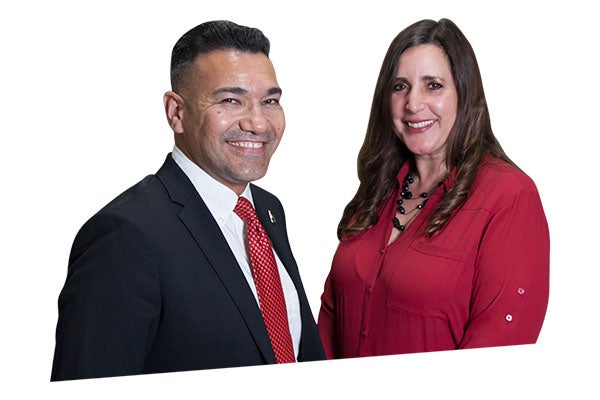 If CSUN officials had to pick just two “poster children” for public education in the San Fernando Valley, who are paying it forward, right back to the public, that might be Patrizia Puccio and Gonsalo Garay. Graduates of Reseda High School, the two friends (who act like family) went separate ways for their bachelor’s degrees: Garay to UC San Diego and Puccio to Pierce College and then CSUN, where she earned a bachelor’s in child development in 1997. Armed with emergency teaching credentials, each followed a lifelong dream and dove into classroom teaching. In no time, they were teaching together, in adjacent classrooms, at Bertrand Avenue Elementary School — just up the road from their high school alma mater. Garay ’02 (Credential), ’06 (M.A., Educational Administration) taught fourth grade and Puccio, fifth. “LA Unified [School District] has unified us. We were raised in LA Unified, and we work together in LA Unified,” said Puccio, whose parents emigrated from Cuba and Italy. “I will only work for LA Unified because it’s the system that gave to me, and I’m giving back.

I had an amazing education from kindergarten to 12th grade.” After earning her bachelor’s at CSUN, Puccio returned to campus to earn two master’s degrees (one in special education in 2008 and one in school administration in 2010), as well as a teaching credential and administrative credential. Since 2014, she has served as principal of Pinewood Elementary School in Tujunga. “When Gonsalo and I started teaching, never in a million years did we think we’d go into administration,” said Puccio, who, like Garay, spent a decade as a classroom teacher. Garay chose CSUN’s master’s program and administrative credential, which he completed in 2006. In 2012, he became the principal at Roscoe Elementary in Sun Valley. Recently, he was promoted to administrator of parent and community engagement for LAUSD’s entire Local District Northwest. The fourth of seven children, Garay was raised by immigrant parents who put education first, he said. “My parents were immigrants who came from Mexico, and they — particularly my father — were huge on giving back to the community and close ties to your roots,” Garay said. “You think about social upward mobility. Look at the United States and our public education system, wow.

It’s free! Just show up. “My parents said, ‘Listen, you’re not out on the farm. You’re getting an education for free,’” he said. “And so, it was: God, parents, teachers. Education was that important. You had to do well. My parents knew they didn’t want us to be working the way they worked.” After earning his bachelor’s and years of teaching in elementary school classrooms, Garay chose CSUN’s Michael D. Eisner College of Education because he’d done his research. “I knew CSUN had a top program. It was in the Valley, it was local, it was more affordable,” he said. “So when you talk about bang for your buck, there was no question. The program [was taught by] practitioners, people who were in the field, with real-world experience. That’s what I wanted. The other thing that drew me to CSUN was the diversity of the student body.” Puccio praised her CSUN administrative degree cohort, which met off campus at an LAUSD school site. “That was the best education I’ve ever gotten in my life, because it was mostly taught by LA Unified principals, so it was geared for exactly what we were going to become,” she said. “It really prepared us to be principals.” But she won’t sugarcoat her job as principal: “I’m not going to lie. It’s the hardest job I’ve ever done.” Garay, who earned his master’s at CSUN in the on-campus program, loved the college’s emphasis on project-based learning. “We worked in collaborative groups,” he said. “You weren’t working in isolation, which is what education is about, and all our Common Core standards are based on that. We learned to collaborate, to think critically. CSUN was [way ahead] on those trends.” —Olivia Herstein