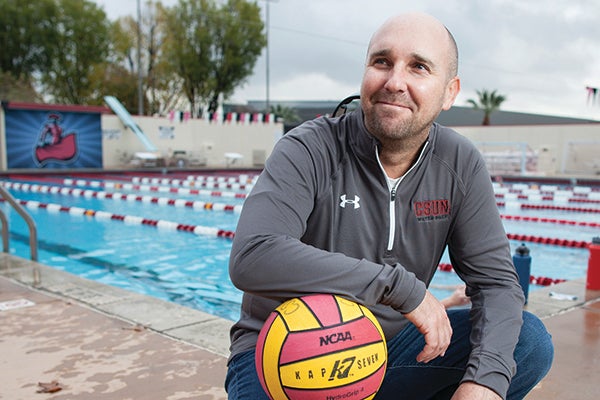 Matt Warshaw ’06 (Communication Studies) returned to California State University, Northridge in 2015 for the first time in almost a decade after accepting an assistant coaching position with the women’s water polo team. To Warshaw, the 356-acre campus looked vastly different than what he remembered. “When I was here as a student, the Student Recreation Center (SRC) and the University Student Union (USU) weren’t even built yet, and parts of the campus were still underdeveloped,” Warshaw said. “It just looked so different to me when I first came back.” It may have taken some time to adjust to the new campus layout and scenery, but Warshaw — who spent 12 seasons as the assistant water polo coach at California Lutheran University from 2003-14 — said he soon felt that he was home again. “One of the neatest things was seeing some of the same professors’ names on the [players’] grade sheets and [thinking], ‘Oh yeah, I had that guy, too.’” After spending the 2015 season as an assistant coach for the CSUN women’s team, Warshaw became the fourth head coach in the program’s 15-year history in November 2016. “The opportunity to become head coach presented itself, and, after my time as an assistant, I knew I’d be a good fit,” Warshaw said. Part of Warshaw’s coaching strategy — which helped him win two NCAA Division III national championships (2007 and 2010) at Cal Lutheran — is to keep an eye on the calendar throughout the year and know when to go easy in practice, and when to up the intensity. Warshaw said he believes the knowledge he gained in 2016 as an assistant should make the transition to head coach a seamless one. “The level of talent, culture and commitment here is elevated on the Division I level,” Warshaw said. “My goal is to get the team into the top 15 and be competitive in Big West Conference play, which I’m really looking forward to.” —Paul Amico