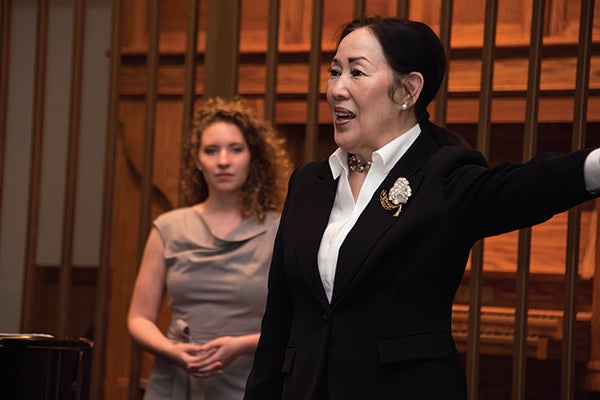 Distinguished alumna Shigemi Matsumoto ’68 (Music) conducted a master class on March 3 for vocal arts students. For two hours, she taught music in CSUN’s Nordhoff Hall. But she did it in a way that incorporated physiology, philosophy, history and, in a sense, biology and botany. “The first note of any piece is your nucleus,” she explained. “It’s your seed.” Six students sang, uninterrupted, as the opera legend sat and observed. Then, she approached each budding classical music vocalist, asked them to sing parts of the pieces they had performed and gave each personal vocal coaching. Matsumoto was honored in 2016 with a CSUN Distinguished Alumni Award. She was the first star of the university’s opera program and went on to achieve international fame in a performing career that spanned more than two decades. Since the late 1980s, she has devoted her work to music education, having taught at Cal State Long Beach and the University of Southern California. This was Matsumoto’s second trip to teach at CSUN in the past year, and it was her first master class on campus. To establish a lasting legacy for CSUN’s Mike Curb College of Arts, Media, and Communication, Matsumoto and her husband, Marty Stark, whom she met while both were students at Valley State, have created the Matsumoto Scholarship for undergraduate vocal arts students. In March, they bequeathed an estimated $1 million to CSUN through their charitable remainder trust. “I am so blessed and happy that Marty and I could leave something for the students, so that maybe somebody could [have the same] opportunity I had,” Matsumoto said. “I know that a university’s strength is from their alumni base. Those are the people who felt good about being there, so when they left and succeeded in some way, they came back to want to share that [success].”