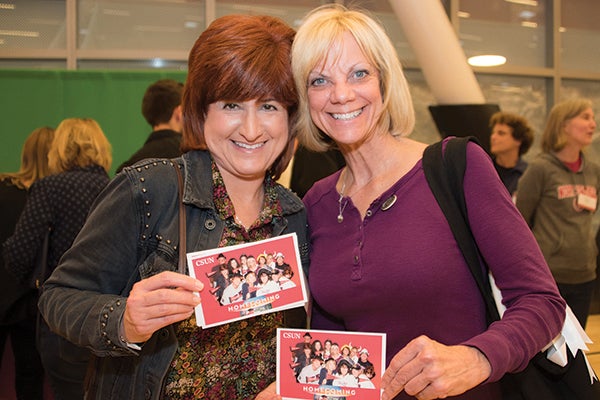 In February, CSUN celebrated Founders’ Day and Homecoming, the first all-alumni gathering in nearly a decade. Alumni from the classes of 1966 and 1967, as well the faculty and staff who began their employment at CSUN during those years, came together for an afternoon luncheon and induction into CSUN’s 50-year Club. Afterward, they joined hundreds of other alumni, students, faculty and staff at other Homecoming activities, culminating in the Matador Men’s Basketball team win over the UC Santa Barbara Gauchos in front of a packed Matadome crowd. “Just like past times of political and social change, we have come together as a campus community — regardless of opinions and beliefs,” said CSUN President Dianne F. Harrison, speaking at the Founders’ Day luncheon. Harrison spoke of the parallels between the challenges faced by today’s CSUN students and those encountered and overcome by the university’s 50-year inductees, affectionately known as “Valley Staters” (who graduated from San Fernando Valley State College, CSUN’s name until the early 1970s). After the luncheon, alumni and their families made their way to the award-winning Student Recreation Center (SRC). Activities included pinewood derby races at the Matador Motorway — a 42-foot long, vinyl red-and-black ramp — a barbecue and kids’ buffet, kids’ carnival games, crafts and tours. In the SRC’s Red Ring Courts area, alumni also enjoyed tasting “Matador Red” ale from alumni-owned and Valley-based 8one8 Brewery, and checked out demonstrations by popular CSUN programs. The most memorable facets of Homecoming for most alumni, however, were the human connections — and reconnections. Many alumni noted that they had not returned to campus for years, or even decades. As they sat together at themed tables or caught up with one another at mini reunion gatherings for programs and groups such as journalism, Associated Students, and a host of fraternities and sororities, alumni from six different decades embraced, took selfies and swapped old stories. CSUN Director of Intercollegiate Athletics Brandon E. Martin may have said it best, as he fired up the alumni crowd at a pep rally preceding the basketball game: “Who’s excited about being a Matador tonight?” he shouted, eliciting a roar from the alumni and cheers from the Matador Band and cheerleaders. “I’m delighted to be here with our Matador family. It’s been the alumni who have stepped up and provided the support for our facility enhancements and improvements.” —Olivia Herstein and Cary Osborne