Hail to the Dean 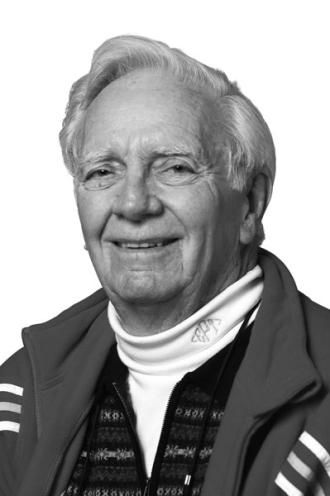 Simply stated, EDMUND PECKHAM — or “Dean Ed” as he was affectionately known — was one of the most influential figures in the history of California State University, Northridge. On Oct. 31, 2016, the former dean of students and vice president for student affairs passed away in Arizona at age 92 after a brief illness. “He is a person we will all choose to remember fondly.

Those who had the opportunity to work with him while they were in student government all have classic experiences and discussions they can recall having with him,” said William Watkins, CSUN’s vice president for student affairs, who worked closely with Peckham as a student when Watkins was Associated Students president in 1973-74. “He clearly had a point of view, but didn’t retreat from permitting students an opportunity to express their sense of what they needed for the generation at hand.” Peckham was born in Worcester, Mass., in 1924.

The son of two educators, he served in the U.S. Army from 1942-46. He graduated from Brown University in 1948 with a degree in modern and medieval European history, and he later earned his master’s (1949) and Ph.D. (1954) in American history and foreign relations from Harvard University.

His influence on CSUN student life spanned more than two decades. He initiated a comprehensive program to improve student life on campus and supervised areas such as student leadership/Associated Students, athletics and Greek life. He oversaw the openings of the University Student Union and the Klotz Student Health Center. Peckham retired in 1991. However, he remained active on campus, particularly supporting CSUN Athletics. In 1992, he was inducted into the Matador Hall of Fame.

He also played a key role in helping the CSUN Alumni Association enhance its support of current students, creating the Legacy and First Generation Scholarship Programs. Dean Ed Peckham Legacy Scholarships are awarded annually to two members of the CSUN freshman class. Peckham was named “Honorary Lifetime Director” of the Alumni Association Board of Directors, and in 2000, he received CSUN’s first Emeritus Merit Award at the annual Volunteer Service Awards. In 2002, the award was renamed the Dean Ed Peckham Award. “We named the award after him because of his dedication and loyalty to the university,” said Shellie Hadvina ’90 (Recreation), M.P.A. ’98, assistant vice president for alumni relations and annual giving. “That’s a true testament of how involved he was, even after he retired from the institution. CSUN was important to him, and he had such a wealth of information that he shared with us after he retired.” Peckham is survived by his wife, Dorry; his children, Douglas Peckham, Karen Mygatt and Bob Peckham; their spouses; grandchildren Aaron, Hannah and Caleb; and a great-grandchild, August.