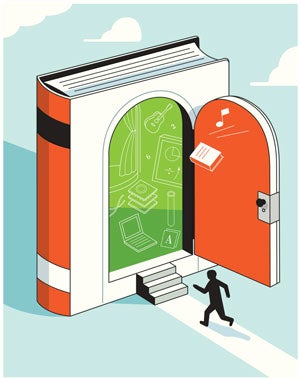 Professors and staff at California State University, Northridge often remark that the freshmen seem to “get younger every year.” But around campus, it’s not just their imagination — there are students walking through the halls and across the lawns who have yet to hit puberty or get their license to drive. Nearly every day of the year, CSUN opens its classrooms, theaters, fields, rock climbing wall — and in the summer, its dorms and swimming pools — to crowds of students in grades K-12 who want to grow their minds and have some fun in the process. In addition to numerous activities and opportunities during the school year, the university offers academic programs such as the Summer Academic Enrichment Program (SAEP) and the Summer Academic Program for Elementary School Students (SAPESS).

CSUN’s award-winning Teenage Drama Workshop (TADW), a six-week intensive workshop for youth entering grades 7-12, trains students in acting, dance, lighting, sound and much more. And, for children of all ages interested in sports, Matador Athletics offers camps in soccer, tennis, softball, baseball and volleyball. During the school year, CSUN also pays it forward to the surrounding community by bringing thousands more K-12 students to campus for programs that range from theater, dance and engineering to college-prep mentoring for disadvantaged youth. Summer Fun in the CSUN The University Student Union’s 10-week Sunny Days Camp welcomed 250 full-day and 100 half-day campers in 2016. The half-day program allows campers to take part in fun on-campus activities such as swimming, rock climbing at the Student Recreation Center, and playing billiards and table tennis in the Games Room. Full-day campers take weekly field trips to places such as the Los Angeles Zoo, the Wildlife Learning Center and the El Capitan Theatre.

Longtime Sunny Days Director Jeremy Hamlett said the program is a fun, secure environment for all campers. “All of our counselors are CSUN students, and the majority of them are child development majors,” Hamlett said. “It’s very safe as well as convenient for parents who are in our neighboring community.” The university’s summer academic programs are also incredibly popular and book up early, in March and April of each year. SAEP offers classes such as digital photography, choir, algebra and creative writing to middle school students. For high school students looking to earn credit during the summer, the program offers courses such as geometry, pre-calculus, and speech and debate. “Part of the purpose of holding SAEP on a California State University campus is to instill and awaken a sense of hope and possibility in all of our students as they study and learn,” SAEP Director Mira Pak said. The program offered three new classes in 2016: introduction to ukulele, girls-only computer animation and girls-only robotics, Pak said. 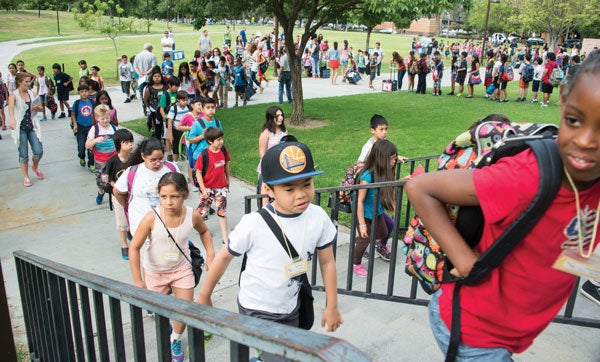 SAPESS, which is designed specifically for students entering grades K-5, focuses on developing and growing participants through hands-on academic and enrichment activities such as robotics, math, art and science. Thespians and All-Stars Teenage Drama Workshop was born the year before CSUN itself (which started as a satellite campus of what was then Los Angeles State College, now Cal State LA) in 1957, in the college’s Department of Theatre. In summer 2016, the workshop put on performances of Shrek the Musical Jr. and Around the World in 80 Days. “For nearly 60 years, Teenage Drama Workshop has been presenting highly entertaining, professional-quality shows that, in many cases, introduce the art of live theater to young audiences,” said CSUN Theatre Professor Doug Kaback, TADW’s executive director. “Our productions feature the creative work of professional directors and scenic, costume and lighting designers, but always keep the focus on our emerging teen artists as they shine on stage and behind the scenes. “You never know what talent will emerge from our program,” said Kaback, noting that TADW’s alumni include Elizabeth McGovern of Downton Abbey and Mare Winningham of American Horror Story, as well as Daniel David Stewart, who appeared in the Broadway production of Spring Awakening. TADW started out as an activity for teens, to call attention to the cultural resources available at “Valley State.” Over the years, the workshop has grown into a nationally acclaimed drama program. 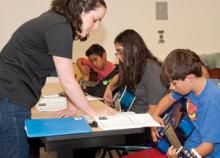 Matador Athletics summer camps include the always-popular youth soccer camps, which are run by CSUN coaches and players. VPAC Gets in on the Act The Valley Performing Arts Center (VPAC) at CSUN invites and hosts young music aficionados, school groups and young musicians themselves throughout the year for a wide variety of fine and performing arts programs. More than 12,000 K-12 students from around the San Fernando Valley have enjoyed the opportunity to be a part of the Student Matinee Series, an ongoing year-round program at CSUN that brings free, high-caliber artistic experiences to local students. The program, which began in 2011, has been providing local schoolchildren firsthand experience with professional performers, which can be used in the classroom to enhance their understanding of the arts. Since art has become a Common Core standard for the Los Angeles Unified School District, teachers from these schools can use the performances as part of the curriculum to teach fine arts, said Anthony Cantrell, director of arts education at the VPAC.

The series also ties into the VPAC’s mission to serve the community, he said. Cantrell, who has 20 years of experience as a high school theater teacher, helps prep many of the students before they watch and listen to the performances. The district’s standard mandates that arts be integrated into different disciplines in the classroom, such as health sciences and mathematics, Cantrell said. “Non-arts teachers can learn more about how to use arts effectively in their classrooms,” he said. “There are strategies that we explore and share with teachers, to weave them in more seamlessly, rather than as a separate lesson.” Cantrell said he believes the series is valuable to students and teachers alike. “I’ve designed a program that I would have loved to take part in when I was a teacher,” he said. Mentoring Local Youth CSUN’s MOSAIC program — Mentoring to Overcome Struggles and Inspire Courage — co-sponsors an annual conference to invite more than 200 local high school students to campus to tackle issues surrounding diversity and race. 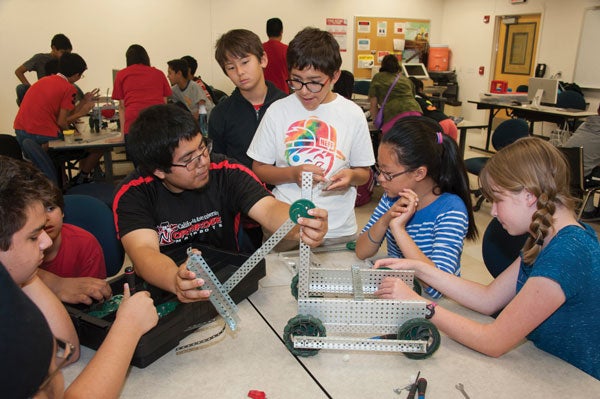 This past fall at the University Student Union, MOSAIC presented a social justice art installation created by CSUN student mentors and their teen mentees. The fall exhibit was the largest of its kind ever organized on the CSUN campus for the program. The exhibit focused on themes of critical race theory in societal power structures, perpetuating marginalization of people of color, and the high school students’ challenges and frustrations. MOSAIC is a long-running and acclaimed CSUN program that pairs CSUN student mentors with youth at risk for educational failure, gang and family violence, drug and alcohol abuse, and emotional trauma. Since 2004, more than 500 sociology major mentors have worked with nearly 1,500 high school youth enrolled in Los Angeles Unified School District continuation programs. —Paul Amico, Olivia Herstein, Carmen Ramos Chandler and Christine Michaels contributed to this report.