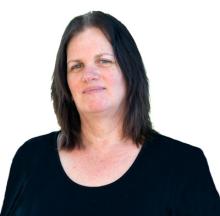 When she enrolled at CSUN in 2003, Daphna Ozery ’07 (Psychology), M.A. ’10 (Educational Psychology, Development, Learning, Instruction & Evaluation) did not fit the profile of a typical American college kid. She was neither American nor a kid. One of the pride points at CSUN, however, is that undergraduates come in many ages, all colors, from all walks of life and often, as was the case for Ozery, they come to cross the finish line after many years of deferring a dream. “I was studying at Hebrew University in Jerusalem,” she said. “I had my first child, and I couldn’t attend classes. And soon I had my second child, so I switched to the Open University. Then I had two more kids. “By then I had 91 units and was about to finish, but we were moving here,” Ozery said of her immigration to the United States. “Later, I was sitting at our home and thinking, I really miss school — and I was about to finish!” The mother of four children age 12 and under and a recent immigrant from Israel, Ozery and her family had landed in LA just two months before 9/11 to pursue better job opportunities and a quieter life in the San Fernando Valley.

Seeking camp options for her children that first summer in their new city, Ozery remembered (from an earlier visit to the area) CSUN’s summer programs for local children — and she enrolled her kids. Then, she set her sights on completing her own bachelor’s degree. “I contacted Pierce College first, and they said, ‘No, you’re too advanced.’ Then, I contacted CSUN. They said, ‘You have 91 units, but we can only recognize 45.’ So I thought, ‘Okay, I’ll just do it!’ So in the end, when I graduated with my [bachelor’s in psychology], I had 145 units because I had all those extra [from universities in Israel]!” Originally a child development major, Ozery decided to study psychology at CSUN. “I was so discouraged” with the timeline for her new major, she recalled. “I thought, now I have this [psychology] program — who knows when I’ll be done, and I work full time (as a technical writer). I had four kids, and three were really young. I thought, I just have to finish this!” During Ozery’s last semester, one of her professors, Howard Lee, encouraged her to apply to a graduate program in the Michael D. Eisner College of Education: the Development Learning Instruction and Evaluation program. Ozery met with Adele Gottfried, director of research enhancement for the Eisner College, and the rest, she said, was history. “[Gottfried] is the one responsible for everything from the moment I met her,” Ozery said, beaming. “She’s my research mentor, my academic mentor, my everything mentor. I love her — she’s my family.” Ozery was accepted into the program in 2008, and she was thrilled to have the opportunity to do research, she said. She chose to do a thesis and empirical study, studying altruism in adolescents.

After years chasing a bachelor’s, it took Ozery just two to complete her master’s. “Toward the end, I thought, that’s not enough for me,” she said. “Dr. Gottfried and Dr. Lee so inspired me, I wanted to continue and do research.” In 2011, Ozery started a Ph.D. program in cognitive psychology at Claremont Graduate University. Her specialty is cognition and language and culture, apropos for someone who has lived on two continents. With her doctorate, Ozery said, she hopes to teach even more courses at CSUN, the university that has become her home. She already teaches three classes as an adjunct faculty member in the Department of Educational Psychology and Counseling. That first finish line long since crossed, Ozery is still running full speed ahead. —O.H.