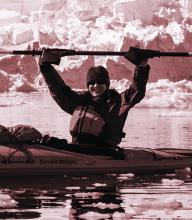 Elisa Kotin ’90 (Psychology, pictured above) has travelled extensively since graduating from CSUN, exploring more than 80 countries, culminating in a trip to Antarctica — her seventh continent — on her 50th birthday. Leonard Martinez ’90 (Accounting Theory and Practice) opened a franchise in 2016, CertaPro Painters of Thousand Oaks.

Rosalynn Brown ’91 (Psychology), M.S. ’96 (Recreation) created 60 original Mardi Gras-themed dolls to serve as decor for the Los Angeles Department of Recreation and Parks annual 90-plus luncheon, honoring 475 senior citizens citywide, age 90 and over, who participate in senior citizen clubs. The William Grant Still Arts Center in Los Angeles selected four of the dolls to exhibit in their 36th annual Black Doll Show, from December 2016 to February 2017.

Michael LaPlante ’91 (Health Administration) was selected as chief operating officer of the Kimaw Medical Center in Hoopa, Calif., near Eureka. He is board certified in clinical electrophysiology. He has been serving in the Public Health Service for 22 years.

Gene Wilk ’91 (Journalism) was included in a new documentary, Unforgotten 24, which chronicles a group of veterans — many of them Latino or Jewish — who received the Medal of Honor in a special White House ceremony, years after their service (and previous denials, due to discrimination). Wilk was featured in the film because of his work as a legislative staffer on Capitol Hill. He worked on legislation requiring the Pentagon to release the veterans’ records — which led to the long-overdue medals. Wilk spent almost nine years as a Capitol Hill aide, first for Rep. Robert Wexler (D-Fla.) and then for Rep. Adam Schiff (D-Calif.). He lives in New Jersey and works in public policy advocacy and volunteers as chapter advisor to the Phi Kappa Psi fraternity at Rutgers University.

Christina Fenimore ’92 (Psychology), M.P.A. ’14 (Public Administration) was promoted to a new job in state service. She credited her CSUN M.P.A. for helping her obtain several high-level interviews within the state, including the California Department of Insurance, as well as a promotion to management at the Department of Industrial Relations.

Francine Mazza ’92 (Organizational Systems Management) is celebrating 25 years of working for Enterprise Rent-A-Car, where she started in 1992 after graduating from CSUN.

Cheri (Sasson) Weiss ’93 (Music), M.M. ’95 (Music) is completing her fourth year of cantorial studies at the Academy for Jewish Religion-California. Her new album, Hineni: Music for the High Holy Days, was distributed free to about 1,000 shut-ins, chaplains, rabbis and social workers.

Bruce Edmiston ’95 (Music), M.M. ’98 (Music) received recognition from the Grammy Foundation in 2004 when he was awarded the Enterprise Award for diversity in music programs.

Sharon Eisenberg ’95 (Speech Communication) creates and designs apparel for Roll on by Rollershirts, a company inspired by roller derby and skating. She started the business while recuperating from a serious roller derby injury. She also serves as head of public relations and marketing for her derby league, Beach Cities Roller Derby.

Vivian J. Malauulu ’96 (Journalism) was elected in 2016 to the board of trustees at Long Beach City College, where she has taught journalism. Malauulu noted that she was the first Latina elected to the board, defeating an incumbent. Previously, she taught high school in the Los Angeles Unified School District for 20 years. In addition to her bachelor’s from CSUN, Malauulu earned a Master of Arts from Cal State Dominguez Hills in 2000.