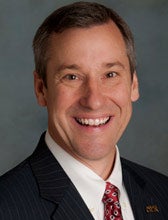 Robert D. Gunsalus, CSUN’s Vice President for University Advancement, is a veteran university administrator with over 20 years of higher education and leadership experience. He is responsible for overseeing Government and Community Relations, Alumni Relations, Fundraising, Special Events, and Marketing and Communications. He also serves as president of the California State University, Northridge Foundation, which is responsible for all of CSUN’s philanthropic assets and is overseen by a volunteer Board of Trustees. The Foundation Board serves as the University’s primary external leadership group. He also oversees KCSN 88.5 FM, a non-profit radio station serving greater Los Angeles. He led the station through a partnership with KSBR in Orange County that was the largest expansion of a non-commercial signal in the history of the U.S. and now serves as the founding chairman of the oversight committee for the combined signal. In addition, Gunsalus serves on the advisory board for LACI@CSUN, an innovation and business incubator serving the San Fernando Valley and beyond, and is involved in numerous other civic and social organizations. He has also served as the chairman of the California State University advancement council, which provides advice and guidance on the marketing, branding, media relations, fundraising, advocacy, alumni relations and endowment management practices throughout the CSU system. At CSUN, his teams have won more than 50 national and regional advancement awards.