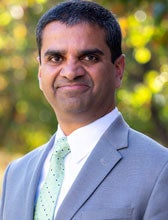 Philip has more than 20 years of information technology experience at CSUN. He served as Associate Vice President for Information Technology since May 2019, a role he initially assumed as an interim in August 2018. He has worked at CSUN since 1999 in several successive roles, including Senior Director for Infrastructure Services and Lead Systems Analyst.

He holds a Bachelor of Engineering, Electronic/Electrical Engineering from the University of Pune, and is working towards a Master of Science, Electrical and Computer Engineering at CSUN. Philip currently serves on the Hyland Higher Education Advisory Board.