Tokiwa University was founded in 1983 with the opening of the College of Human Science, the first institution of higher education offering this discipline in Japan. It followed the successful operation of the Tokiwa secondary and post-secondary schools in meeting the needs of students from Ibaraki and neighboring prefectures.

Originally, the late founder Miyo Morosawa opened a private kimono-making workshop in 1909. In 1922, she established Mito Girls’ School, which made steady progress as a secondary school for girls during the turbulent years before and after the World War II. In 1966, she made a significant contribution to higher education in Mito with the opening of Tokiwa Gakuen Junior College, which was renamed Tokiwa Junior College in 1999.

This initiative ultimately led to the founding of Tokiwa University in 1983 with the first College of Human Science. In 1996, the College of Applied International Studies was added to the university, followed by the opening of the College of Community Development in 2000.

Duration of exchange: Students may participate in the program for one semester (fall only).

Students can stay in the Tokiwa International Hall (a university dormitory) during the fall semester (September through January) and enjoy the following conveniences:

Program costs will be as follows. Students are responsible for:

Tokiwa University will provide you with the following:

Language of instruction: Japanese and English

Courses are offered in the following disciplines:

Each Japanese language course (basic or intermediate) offered to exchange students consists of five classes (90-minutes each) per week, and lasts 15 weeks, which leads to a total of 112.5 hours of instruction.

The following courses are planned for exchange students as transferable credits to learn basic aspects of two Japanese affairs, including politics, economy, society, culture and history. The students are asked to take four classes, including compulsory Japanese Affairs I. The courses are taught in English unless otherwise indicated.

Credit and Grading System: Any academic credits received during the course of the program may be transferred to CSUN for transfer credit as pre-approved by the academic department. Tokiwa University offers a grading system similar to the U.S. system of A, B, C, D and F.

18 units must be taken per semester.

For program and application information, please make an appointment with Eleanor Wolgast or Rebecca Spector by emailing study.abroad@csun.edu or by visiting the International and Exchange Student Center.

For additional program information, you may contact the following faculty member:

STUDY IN
THE STATES 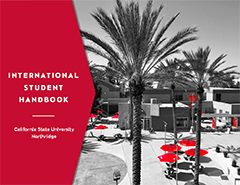 This is a virtual space where a CSUN international student will be able to assist you with navigating and exploring campus resources.