Randal Cummings is a lecturer in the Religious Studies Department at California State University, Northridge.

He received his B.A. in English and Comparative Literatures from CSUN, his Masters in “History of Religions” from UCLA and his C.Phil in 1. History of Religions; 2. Biblical Texts and Theology; 3. Church History; and  4. Modern Intellectual History from UCLA.

He recently published an article, “Teaching Fundamentalists in the Classroom” for the AAR’s “Spotlight on Teaching” series, and is currently completing a chapter forTeaching Religion and Violence dealing with “Religion and Violence in Popular Culture” to be released by Oxford Press.

Prof. Cummings chairs the Arts of Interpretation Group that meets annually at the American Academy of Religions. 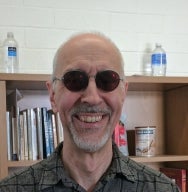 The Other Side Magazine, April 1985, “Propaganda, Words, and the Word.”

Society of Biblical Literature, Pacific Coast Region, Student Essay Prize in Hebrew Bible, Spring 1999, “An Investigation of the Intertextuality of the Call Narratives of Isaiah and Jeremiah.”

From Prophet to Priest: The Characterization of Aaron in the Pentateuch, Peeters Publishers: Leuven, Belgium, 2017.

Dr. Findlay also has his own blog, "Spiritual Exploration," which focuses on spiritual practice and discernment. The blog can be found at: http://spiritualexploration.wordpress.com

Dr. Elaine Goodfriend is a lecturer at California State University, Northridge and teaches courses in History, Jewish Studies, and Religious Studies. Elaine Adler Goodfriend has a B.A. in Semitic Languages and Literatures from Cornell University, and an M.A. and Ph.D. in Near Eastern Studies from U.C. Berkeley. She has taught at CSUN for the past sixteen years, and has taught at other local universities, including Loyola Marymount, the American Jewish University, and Claremont Graduate School.

Her interests are the Hebrew Bible and Jewish History.

Elaine’s most recent publication is the entry, “Ethical Theories in the Bible,” for The Oxford Handbook of Jewish Ethics and Morality, edited by Elliot Dorff (publication forthcoming). She has published articles in the Anchor Bible Dictionary, The Torah: A Women's Commentary, and The Cambridge Dictionary of Jewish History, Religion, and Culture.