“Discourse [is] a Violence We Do to Things”: Scripturalization as Slavery 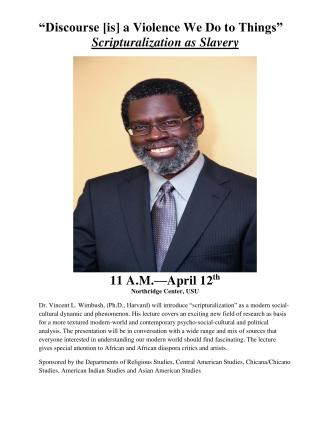 In his lecture: “Discourse [is] a Violence We Do to Things”: Scripturalization as Slavery, Dr. Vincent L. Wimbush, (Ph.D., Harvard) will introduce “scripturalization” as a modern social-cultural dynamic and phenomenon. His lecture covers an exciting new field of research as basis for a more textured modern-world and contemporary psycho-social-cultural and political analysis. The presentation will be in conversation with a wide range and mix of sources that everyone interested in understanding our modern world should find fascinating. The lecture gives special attention to African and African diaspora critics and artists. 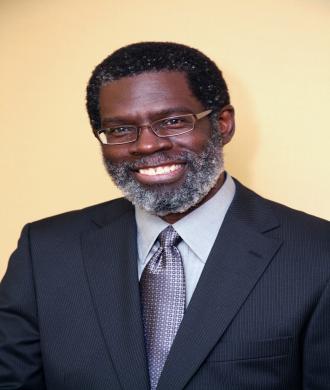 Vincent L. Wimbush is an internationally-recognized scholar of religion, with more than thirty years’ experience as professor, mentor, researcher, and organizer of collaborative research projects, conferences, and initiatives. He is the founding director of the Institute for Signifying Scriptures, an independent international scholars’ organization that excavates “scriptures” as cross-cultural phenomena, practices, and dynamics for critical comparative inquiry in discourse and power and social formation and relations, therewith modeling and advancing a new field of transdisciplinary critical research.

His own current research interests and projects involve theorizing scriptures as window onto the formation of modernity and relations of power, focusing on African diasporas as windows onto the modern phenomena of scripturalization and scripturalizing. He is the author of scores of essays and articles and is author or editor of more than 12 books, including Scripturalectics: The Management of Meaning (Oxford University Press, 2017); (ed.) Refractions of the Scriptural: Critical orientation as Transgression (2016); (ed.) Scripturalizing the Human: The Written as the Political (2015); White Men’s Magic:  Scripturalization as Slavery (2012); (ed.) MisReading America:  Scriptures and Difference; Theorizing Scriptures: New Critical Orientations to a Cultural Phenomenon (2008); and (ed.) African Americans and the Bible: Sacred Texts and Social Textures (2000).  He is executive producer of a documentary film, Finding God in the City of Angels (2009), an ethnological study of several religious communities in Southern California.

Past president of the Society of Biblical Literature, Wimbush has held full-time faculty appointments at Claremont Graduate University; Union Theological Seminary (New York City); and the Claremont School of Theology. He has also taught at Harvard Divinity School; Pacific School of Religion; Iliff School of Theology; Drew University; and most recently, Williams College. He was Phi Beta Kappa Visiting Scholar in 2015-2016. He is founding editor of The Abeng: A Journal of Transdisciplinary Criticism, editor of the Signifying (on) Scriptures book series (with Penn State University Press) and is editorial board member of the Journal of Africana Religions. He has received research fellowships and grants from the American Council of Learned Societies; National Endowment for the Humanities; the Ford Foundation; the Henry W. Luce Foundation; Society of Biblical Literature; and the Lilly Endowment. In 2014 he was appointed an honorary professor at the University of Kent, Canterbury, UK.

Wimbush is a Phi Beta Kappa graduate of Morehouse College; has a M.Div. degree from Yale Divinity School; and took the A.M. and Ph.D. degrees in the Study of Religion from Harvard University.