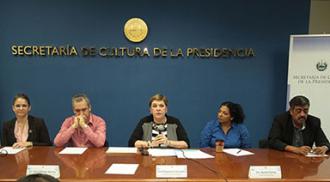 Honorable Ana Magdalena Granadino, Secretary of Culture, presided the event where the diplomas of participation in The Salvadoran Cultures Program were presented to the participants

San Salvador, El Salvador. The Secretary of Culture of the Office of the Presidency of El Salvador, through the National Direction of Spaces of Cultural Development, the National Direction of Research in Culture and Art, the Central American University “José Simeón Cañas” (UCA), and California State University, Northridge, presented this Monday, July 8, 2013, diplomas of participation to personnel of the national network of Houses of Culture and other instances of the Secretariat of Culture.

The Salvadoran Cultures Program benefited approximately 30 workers of the Secretariat of Culture who work at different locations of the national territory, directly with their communities, through the national network of Houses of Culture. 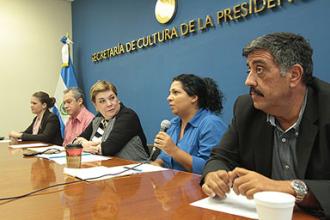 This Program took place throughout 2012 as a hybrid course on critical thought about Salvadoran cultures under the coordination of the National Direction of Research on Culture and Art, the Central American University “José Simeón Cañas,” and California State University, Northridge. The objective of the program was to provide participants with the critical, theoretical, and methodological tools that would allow the Directors of the Houses of Culture in different locationsthroughout the nation to reflect, discuss, and elaborate a working project about four fundamental aspects of Salvadoran culture: the nation, identities, culture, and historic memory. The program was taught by an outstanding group of faculty from the Central American University in San Salvador and California State University, Northridge, as well as other national and international universities, including the University of El Salvador, Carleton College in Minnesota, the University of Maryland, College Park, among others.

The event was presided by the Secretary of Culture, Honorable Ana Magdalena Granadino; a representative from California State University, Northridge, Dr.Beatriz Cortez; a representative from the Central American University “José Simeón Cañas, Dr. Ricardo Roque Baldovinos; the national director of Spaces for Cultural Development, Ms. Mayra Barraza; and the national director of Research in Culture and the Arts, Dr. Sajid Herrera.

The Diplomas of participation were presented at the press conference room of the Mar de Plata offices of the Secretariat of Culture where approximately 30 individuals who work to promote culture in El Salvador received their diploma of participation. 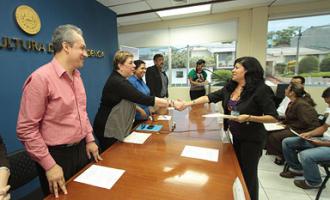 Participants receive their diplomas of participation

The Secretary of Culture, Honorable Ana Magdalena Granadino, expressed her satisfaction for the culmination of the project and stressed the importance of offering a training program to the personnel that directs the Houses of Culture; at the same time, she thanked everyone involved in the realization and culmination of this program.

Dr. Beatriz Cortez, professor of Central American Studies at California State University, Northridge, spoke of the importance of continuing some of the projects that several directors of Houses of Culture have designed for their communities, because that is the palpable result of the effort, time, and dedication placed to the study of the theory and academic aspects of Salvadoran cultures.