An Overview on the Middle Eastern Diaspora in the US: Challenges & Opportunities for Integration 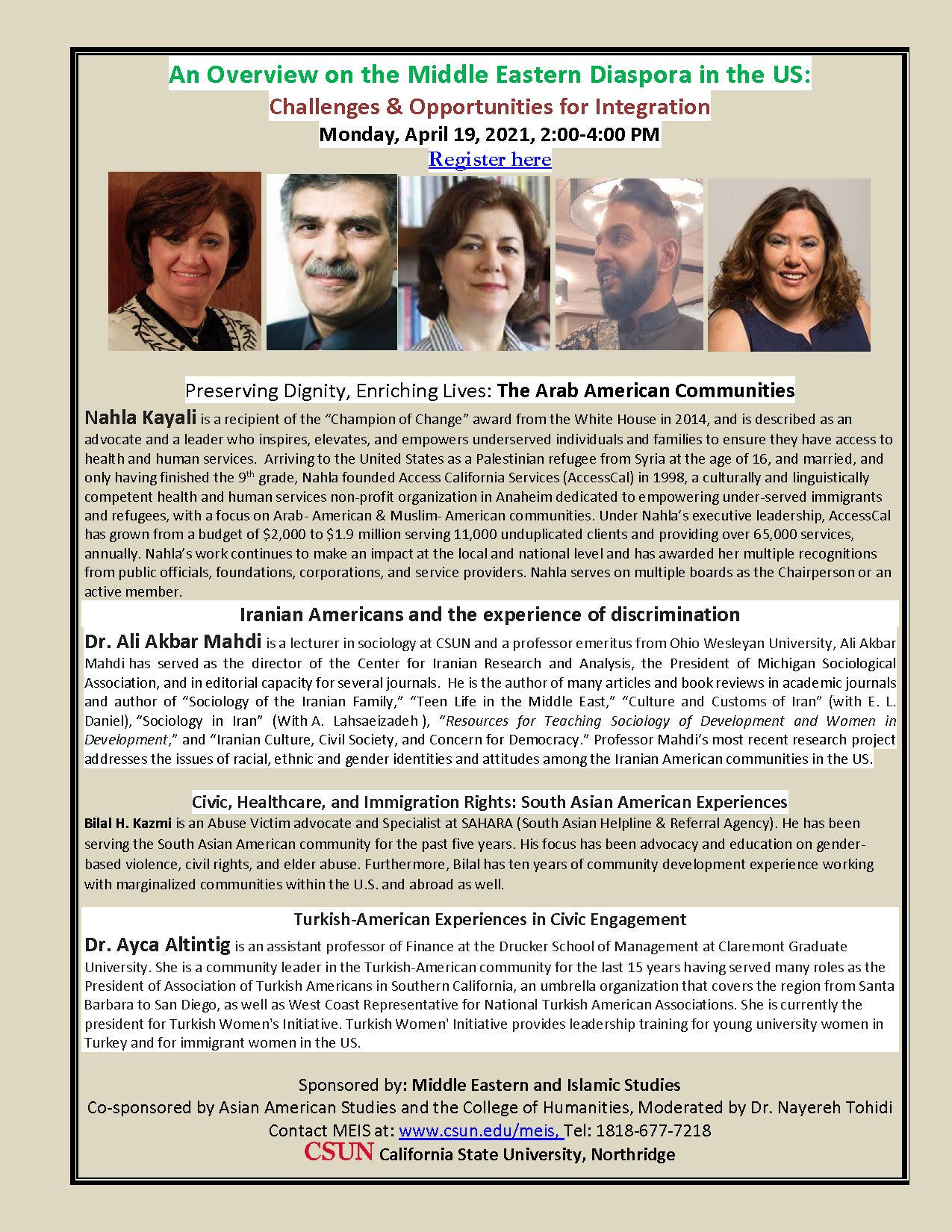 An Overview on the Middle Eastern Diaspora in the US: Challenges & Opportunities for Integration

Nahla Kayali is a recipient of the “Champion of Change” award from the White House in 2014, and is described as an advocate and a leader who inspires, elevates, and empowers underserved individuals and families to ensure they have access to health and human services. Arriving to the United States as a Palestinian refugee from Syria at the age of 16, and married, and only having finished the 9th grade, Nahla founded Access California Services (AccessCal) in 1998, a culturally and linguistically competent health and human services non-profit organization in Anaheim dedicated to empowering under-served immigrants and refugees, with a focus on Arab- American & Muslim- American communities. Under Nahla’s executive leadership, AccessCal has grown from a budget of $2,000 to $1.9 million serving 11,000 unduplicated clients and providing over 65,000 services, annually. Nahla’s work continues to make an impact at the local and national level and has awarded her multiple recognitions from public officials, foundations, corporations, and service providers. Nahla serves on multiple boards as the Chairperson or an active member.

Iranian Americans and the experience of discrimination

Dr. Ali Akbar Mahdi is a lecturer in sociology at CSUN and a professor emeritus from Ohio Wesleyan University, Ali Akbar Mahdi has served as the director of the Center for Iranian Research and Analysis, the President of Michigan Sociological Association, and in editorial capacity for several journals. He is the author of many articles and book reviews in academic journals and author of “Sociology of the Iranian Family,” “Teen Life in the Middle East,” “Culture and Customs of Iran” (with E. L. Daniel), “Sociology in Iran” (With A. Lahsaeizadeh ), “Resources for Teaching Sociology of Development and Women in Development,” and “Iranian Culture, Civil Society, and Concern for Democracy.” Professor Mahdi’s most recent research project addresses the issues of racial, ethnic and gender identities and attitudes among the Iranian American communities in the US.

Bilal H. Kazmi is an Abuse Victim advocate and Specialist at SAHARA (South Asian Helpline & Referral Agency). He has been serving the South Asian American community for the past five years. His focus has been advocacy and education on gender-based violence, civil rights, and elder abuse. Furthermore, Bilal has ten years of community development experience working with marginalized communities within the U.S. and abroad as well.

Dr. Ayca Altintig is an assistant professor of Finance at the Drucker School of Management at Claremont Graduate University. She is a community leader in the Turkish-American community for the last 15 years having served many roles as the President of Association of Turkish Americans in Southern California, an umbrella organization that covers the region from Santa Barbara to San Diego, as well as West Coast Representative for National Turkish American Associations. She is currently the president for Turkish Women's Initiative. Turkish Women' Initiative provides leadership training for young university women in Turkey and for immigrant women in the US.

Co-sponsored by Asian American Studies and the College of Humanities, Moderated by Dr. Nayereh Tohidi