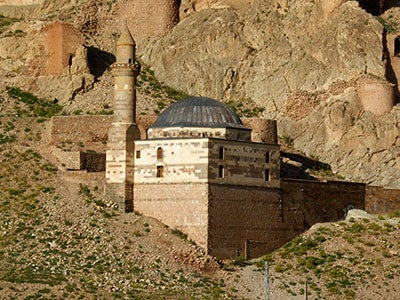 In January 2011, spearheaded by Dr. Nayereh Tohidi, Professor at Gender and Women’s Studies Department, the College of Humanities received a major grant ($100,000) from the National Endowment for the Humanities, Division of Education, Bridging Cultures Program, to establish a minor in Middle Eastern and Islamic Studies (MEIS).

This enabled us to propose what CSUN faculty have envisaged: the creation of a program in Middle Eastern and Islamic Studies to guide humanities teaching, scholarship, and program development.  The mission of such a program would be to work toward cross-cultural bridge building, interreligious dialogue, and the exploration of such topics as the role of diaspora Muslims and the effect of globalization, feminism and the women’s movements in reformation, democratization and secularization of Muslim-majority countries.

This Minor seeks to broaden Americans’ understanding of Islamic cultures and the Muslim communities both internationally and within the United States.  MEIS is being designed to train students in the languages, history, politics, religion, sociology and cultures of the Middle East and its peoples. Among the primary beneficiaries of this new program are students who have an interest in becoming scholars, translators, interpreters, diplomats, businesspersons, journalists, negotiators, and personnel in foreign offices.   Through offering an undergraduate minor, sponsoring courses, organizing conferences, film and lecture series, MEIS brings together interested students, faculty, and Middle Eastern communities in larger Los Angeles.

MEIS is being housed in the Office of Interdisciplinary Studies in the College of Humanities, although it draws from courses from multiple colleges, including the College of Social and Behavioral Sciences, the College of Arts, Media, and Communication. The creation of this new minor has mobilized faculty and the administration, bringing CSUN another step closer to global studies, building international ties, and realizing a long-term goal of creating a Center for graduate studies and research in the MENA (Middle East and North Africa).