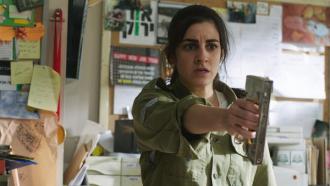 This 2014 Israeli feature film is a dark comedy about the Israeli military service of female soldiers serving as clerks in the Human Resources office of a remote desert outpost.  In contrast to the usual heroic film about the Israeli Defense Force, Zero Motivation is an irreverent view of the social reality behind the scenes.  Divided into three loosely connected stories, the film is filled with hilarious (and occasionally horrifying) scenes exploring feminism, friendship, work ethics, and the diversity of Israeli society.  The actors and script are superb, and the film won 5 Israeli Academy Awards and the Tribeca Film Festival Best Narrative award.  In Hebrew with English subtitles.

97 minutes, followed by Q & A with CSUN Jewish Studies faculty.

Everyone is invited -- BUT ALL SEATS ARE NOW BOOKED.  WE ARE NO LONGER ACCEPTING REQUESTS FOR SEATS.