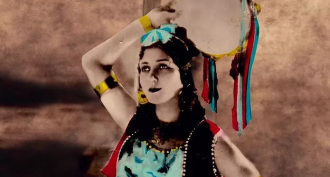 We announced this film previously and it is now fully booked.  If you need to cancel your reservations for the film, please contact the Jewish Studies program as soon as possible – there are people who still want to attend.

This fascinating documentary tells story of the first years of Indian filmmaking, when it was taboo for Hindu and Muslim women to act onscreen in the dramatic roles featured in popular cinema. Jewish women, performing under exotic and mysterious pseudonyms like Sulochana, Pramila and Nadira, rose from obscurity to national stardom. Jewish men also grabbed the new opportunities. These actors were members of India’s Jewish Baghdadi and Bene Israel communities, but the public was unaware of their Jewish identities. Featuring interviews with descendants and archival footage, Shalom Bollywood shows how these cinematic pioneers carved their own paths in Bollywood while retaining a deep connection to their heritage. 85 minutes, in English and English subtitles.

Followed by a discussion with CSUN faculty.

Limited seating. RSVP required. Please call (818) 677-4724 or email jewish.studies@csun.edu to reserve a seat (maximum 2 seats per request – names for each seat are required).