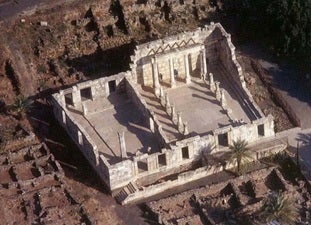 Mr. Goldin will explain how Israel represents the continuity and history of the Jewish people and is also the land which gave rise to Christianity.  He will show archaeological artifacts and slides as he talks about Tel-Aviv, Capernaum and Jerusalem.

The name Tel-Aviv, captures the essence of what Israel represents - both the ancient and the renaissance in the Jewish homeland. A tel is a man-made mound accumulating layers of civilization built one over the other and symbolizing the ancient; Aviv is Hebrew for "spring", symbolizing renewal. Capernaum,a small town on the north shore of the Sea of Galilee, has archaeological remains from both Jews and Christians who lived together during the early centuries of the common era.  Lastly, Goldin will explore Jerusalem as a modern, vibrant city, and a holy city built and rebuilt through the ages.