The Phenomenal Woman Awards event celebrates women who have made outstanding contributions to our community. It also allows the Gender & Women’s Studies Department to raise funds to sponsor special programming, support student and faculty research, and finance scholarships for Gender and Women's Studies students. In addition, these contributions support the CSUN Women’s Resource and Research Center, the oldest continuing Women’s Center within the California State University system.
This year, at the 12th Biennial Phenomenal Woman Awards, we are pleased to honor women who have made extraordinary contributions to our community through their scholarship, activism, and commitment to excellence.

NBC 4's Beverly White will be our Mistress of Ceremonies.

An accomplished journalist for more than 30 years, Beverly White has covered a variety of breaking national stories for NBC4, including the Boston Marathon bombings and the Texas fertilizer plant explosion. Local high profile stories include the Calabasas mid-air airplane collision and the Seal Beach hair salon shooting, which was the deadliest mass killing in Orange County history. In 2012, White received the Distinguished Journalist Award from the Society of Professional Journalists for her good news judgment, a strong sense of ethics and a passion for getting the story right. She was also named one of THE 50 Fabulous Women of 2013 by THE Magazine, a lifestyle publication covering the San Gabriel Valley. In 2008, she was honored with the Leadership Award from the California Legislative Black Caucus.

Amy Brenneman divides her time evenly between acting, producing and political activism. She was raised in Connecticut and earned a degree in Comparative Religion at Harvard, with a specialty in Indo-Tibetan Religion.  She studied sacred dance and indigenous ritual in Kathmandu. She moved to LA to star in “NYPD Blue.”  Amy created, executive produced and starred in “Judging Amy,” which was based on the work of her mother, the Honorable Judge Frederica Brenneman.  Other television credits include Faye Moscowitz on “Frasier” and Violet Turner on Shonda Rhimes’ “Private Practice.”  Amy currently stars on HBO’s “The Leftovers” created by Damon Lindelof. Film credits include:  Casper, Fear, Daylight, Heat, Friends and Neighbors, The Jane Austin Book Club, The Look of Love, and Words and Pictures opposite Clive Owen. Amy produced and directed the documentary “The Way the World Should Be” about the trailblazing work of the CHIME Institute and its mission of inclusive education.  Most recently, she and her husband Brad Silberling executive produced “Heartbeat” for NBC. Amy has taught drama and creative process at the CHIME Charter school, which specializes in educating children of all abilities.  She has also taught at Harvard University’s Winter session and UCLA, among others.

For her activist work, Amy has been honored by Women in Film, The Brady Center, the League of Women Voters, the California State Assembly, the National Children’s Alliance, the Location Managers Guild International, the Chime Institute, Children’s Hospital Los Angeles, the Help Group and the Producer’s Guild of America, among others. She recently received the Eleanor Roosevelt Award from The Feminist Majority for her ongoing commitment to reproductive rights. Amy traveled to Peru as an ambassador for CARE and has been the keynote speaker for NARAL, Cal-Tash, The Council for Exceptional Children and on the steps Supreme Court during oral arguments. 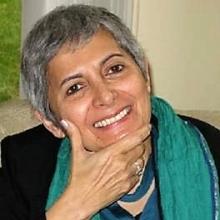 Mehrangiz Kar is a prominent writer, attorney, and activist specializing in women's rights and family law. She is currently a visiting scholar at the Gender and Women's Studies Department of California State University Northridge (CSUN). Prior to this fellowship, she worked as a senior expert at Family Health International (FHI), a Washington DC-based international development organization that focuses on Islamic law and gender in the Middle East. Having practiced law in the Islamic Republic of Iran for 22 years, she has published numerous books and articles on issues related to law, gender equality and democracy in Iran and abroad. She was formerly a visiting scholar at Harvard University, Brown University, University of Cape Town, Wellesley College, and Brookings Institution. Ms. Kar has received several international awards for her human rights endeavors including the Democracy Award from the National Endowment for Democracy, Ludovic-Trarieux International Human Rights Prize, and the Human Rights First Award.

Raised in Pacoima, located in the Northeast San Fernando Valley of Los Angeles, California, Kristy Sandoval is a first generation Xicana. With family mostly in Baja California she grew up experiencing the struggles and triumphs of growing up between two cultures. Sandoval attended the Academy of Art Univeristy in San Francisco and explored her skill of visual art with formal training. Upon her return to Los Angeles Sandoval applied those skills and experience to advocate for arts education in her home town.

This soon lead to public art murals. Having experienced the rich culture in the Bay area’s Mission District, murals became the visual aesthetic she sought to achieve. Proposing a mural design program to local non-profit organization she soon became familiar with the mural process and history in Los Angeles. After learning of the ban for public art murals she discovered loop holes and went about creating work with student participants and community engagement. Through this art practice she discovered the power of healing not only individuals but an entire community through public art. Sandoval has painted murals in Los Angeles, New Orleans, Miami, and inspired the formation of an all woman mural crew in Pacoima known as the H.O.O.D.sisters.

She is now an international muralist after being the first woman to have participated in the Mural Istanbul Festival just last year in July of 2015. On this same visit to Turkey, Sandoval was sough out by the American Consulate after learning of her community work and was brought on board to work with Syrian refugee children. Together they painted a portrait of Malala for their ASAM center. Her work focuses on Womyn empowerment, social and environmental justice and tackles questions of identity in her more personal works on canvas. Currently Kristy is an artist for Amnesty International’s new sector, Art for Amnesty, continuing mural design workshops, raising a 4 year old daughter and exploring new forms of public art that include 2D installations to promote sustainability through functional public art.

Neelam Sharma serves as Executive Director of Community Services Unlimited Inc. (CSU), a non-profit based in South Central Los Angeles. Neelam met CSU founders when she visited Los Angeles from London on behalf of the Panther organization she was a founder of in Britain in the mid 1980's. She first became a community activist as a pre-teen in response to an attempt by fascists to organize in Southall, London, where she grew up and since then was always engaged in grass roots community organizing.

When she moved to South Central Los Angeles from London in 1997 she began to volunteer with CSU and she found that her own difficulties in accessing fresh, high quality, affordable food in her neighborhood was a generalized experience for South LA residents. Her need to feed her own family good food became her work and was driven by her broader understanding of the basic human right to high quality, culturally appropriate food as a critical element of social justice and a basic human right.

Neelam has mostly lived in the South Central community CSU serves, and has two children who attended neighborhood schools. She was a founding member of the Healthy School Food Coalition, the parents’ coalition responsible for passing the soda ban in the Los Angeles Unified School District, the first in the US, as well as the Los Angeles Food Justice Network (precursor to the LA Food Policy Council) and the California Food and Justice Coalition. As a result of her experience and success working and organizing with residents to expand urban agriculture, build models for grassroots economic development, and improve community health, Neelam is recognized as a national leader on the intersection between community economic development, youth empowerment and food justice.

Neelam loves dancing, reading and story telling and is excited about what the future has in store.

Visit our online auction to buy tickets to the event