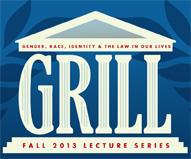 Gender, Race, Identity & the Law in Our Lives (GRILL) presents a

panel on the Voting Rights Act.

is Associate Professor of Law at University of North Carolina School of Law.  He is one of the country's most innovative researchers whose work integrates law, politics and race. He is one of the few academics with formal skills in law and political science whose work addresses the relationship between race and politics in representative institutions. The insights from Professor Crayton's research have distinguished him as a leading voice in the academy and in public institutions. His commentary, insight, and analysis regularly appear in major media outlets including The New York Times, PBS, and Fox News.  Professor Crayton also served as the lead author on an Amicus Curiae Brief for the Supreme Court in Shelby County v. Holder.

is Chancellor’s Professor of Law and Political Science at the University of California, Irvine. Hasen is a nationally recognized expert in election law and campaign finance regulation, and is co-author of a leading casebook on election law. His op-eds and commentaries have appeared in many publications, including The New York Times, The Washington Post, Politico, and Slate. Hasen also writes the often-quoted Election Law Blog. His newest book, The Voting Wars: From Florida 2000 to the Next Election Meltdown, was published in summer 2012 by Yale University Press.

is Professor of Political Science at the University of Southern California.  She is the author of five books on political participation and public opinion in the United States. Her most recent book The Politics of Belonging: Race, Immigration, and Public Opinion (with Natalie Masuoka), was published in 2013 by the University of Chicago Press. Professor Junn has been Vice President of the American Political Science Association, a Fulbright Senior Scholar, a member of the Social Science Research Council National Research Commission on Elections and Voting, and a member of the National Academy of Science Committee on the U.S. Naturalization Test Redesign. She was also the director of the USC – Los Angeles Times Poll during the 2010 California election.

is Associate Professor of Law at Pepperdine University’s School of Law.  His research and writing focuses on election law, particularly federalism and the role of states in federal elections.  At Pepperdine, Professor Muller teaches in the areas of civil procedure, complex civil litigation, election law, and evidence.  Before joining the Pepperdine faculty in 2011, Professor Muller clerked for the Honorable Raymond W. Gruender on the U.S. Court of Appeals for the Eighth Circuit in St. Louis, Missouri.  He then practiced litigation at Kirkland & Ellis LLP in Chicago.