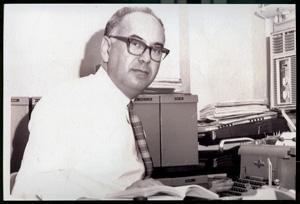 The College of Humanities has received a generous gift of $25,000 from Helen Marie Marcus—daughter of the late Professor Mitchell Marcus—increasing the Professor Mitchell Marcus Endowment and raising the annual English award given in his honor from $2,000 to $3,000. "Given the rising cost of education in the state of California, I believe a larger annual scholarship will better benefit future recipients," says Helen Marcus.

The endowment was originally created in 1991, shortly after the death of Dr. Mitchell Marcus, a professor emeritus and founding faculty member of CSUN's Department of English. His wife, Helen Helms Marcus, continued to contribute to this endowment until her death in 2002. Their two daughters, Mary Ellen and Helen Marie, increased the endowment to $50,000. With Helen Marie Marcus's recent contribution, the endowment presently has a value of $75,000. The Mitchell Marcus Award is distributed annually to a deserving graduate student who possesses the most distinguished record in the study of English literature, language or writing—a fitting tribute to the distinguished role Professor Marcus has played in the history of Cal State Northridge. During his tenure, he witnessed significant evolution at the institution. A satellite campus of Los Angeles State College when he began his career in 1953, the institution formally separated and was established as San Fernando Valley State College in 1956, at which time Marcus became a founding member of its Department of English. By the time he retired as professor emeritus in 1980, the institution, by then known as California State University, Northridge, had grown from its origins as a handful of temporary buildings to a large campus situated on 356 acres. Throughout those 27 years, Professor Marcus was deeply dedicated to the university. As Helen Marcus stated, "My father was a passionate teacher, a great father and a man whose breadth of knowledge was always staggering."

The current English chair, Professor Jackie Stallcup, says that working with Mitchell Marcus Award recipients is incredibly gratifying. "It is such a pleasure to be able to work with these students, and in fact, many of the winners are still here at CSUN teaching in our department," Stallcup said. "One of our very first winners, Stephanie Satie, was just in my office this morning talking with me about the class she was about to go teach. It is such a lovely example of the student-teacher cycle to have the former winners of this award here, carrying on the work that Professor Marcus did with such grace and passion."

College of Humanities dean Elizabeth Say said of Helen's tribute to her father, "At the college, we are seeing more children of emeritus faculty establish endowments to secure their parents' legacy at CSUN. This recognition of the exemplary reputation of Professor Marcus, a member of the college from its inception, stands as a tribute that I hope will also inspire others."

If you would like to make an impact on the College of Humanities, please contact Suren Seropian, Director of Development at (818)677-7135 or suren.seropian@csun.edu.