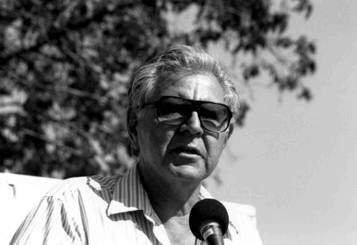 Dr. Acuña received his doctorate in Latin American Studies, concentration in history, in 1968.  His concentration is Northern Mexico and the study of the Mexican in the United States. He is the author 20 titles, 32 academic articles and chapters in books, 155 book reviews and 188 opinion pieces. Three of his books have received the Gustavus Myers Award for the Outstanding Book on Race Relations in North America and more recently Corridors of Migration: The Odyssey of Mexican Laborers, 1600-1933 (Arizona) was named a 2008 Outstanding Academic Title by CHOICE Magazine (American Library Association). Acuña has received the National Hispanic Institute, Lifetime Achievement Award, Austin, Texas, 2008 and the Center for the Study of Political Graphics (CSPG), Historian of the Lions Award, among others. In 1989, Acuña received the Distinguished Scholar Award, National Association for Chicano Studies, the Emil Freed Award for Community Service, Southern California Social Science Library, the Founder's Award for Community Service from the Liberty Hill Foundation among others.  Black Issues In Higher Education selected Acuña one of the “100 Most Influential Educators of the 20th Century. In 1973 he negotiated a Ford Foundation grant that initiated Operation Chicano Teacher. Among his best-known books are Occupied America: A History of Chicanos6th edition (Longman, 2007); Sometimes There is No Other Side: Essays on Truth and Objectivity (Notre Dame, 1998); Anything But Mexican: Chicanos in Contemporary Los Angeles. (Verso Press, 1996), US Latinos: An Inquiry (Greenwood Press, 2003), Community Under Siege (UCLA, 1984), The Sonoran Strongman (University of Arizona, 1974). As an activist and scholar, he has been a leading voice in the Mexican American community.