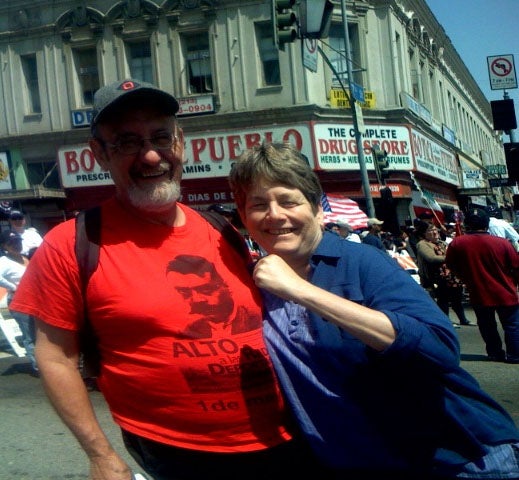 He was an important part of our program, made unique contributions to it, and brought with him his knowledge, his commitment, and experience. Over the last five decades, "Ronaldo" has lived in Latino communities from Chula Vista on the Mexican border, to Maywood, Bell, Echo Park, Pico Union and Highland Park in the Los Angeles area, and he has traveled to almost all the countries of Latin America. He was a student and antiwar activist in Berkeley in the late ’60s; and a factory worker in the ’70s. He became an ESL teacher, Spanish-language translator and book editor in the ’80s and ’90s, during which time he actively supported the revolutionary movements of El Salvador, Guatemala and Nicaragua. He has been part of Central American Studies at CSUN since the year 2000, first as a student, and since January 2006 as a part-time professor.

Ronaldo was a Ph.D. candidate at UCLA, his dissertation research focused on contemporary Central American literature. At UCLA he taught Spanish to undergraduates for one year, in 2004-2005. He also taught English as a Second Language for one year in the L.A. Unified Adult School Program, in 2001-2002, and he taught a class entitled "Latino Experience" at Occidental College in Eagle Rock, for two semesters in 2006-2007. Prof. Ronald Nibbe passed away at his home in Highland Park. His beloved family surrounded him at the time of his departure. Linda Sue Nibbe, Ronaldo's wife for 39 years, is an administrator at Whittier College. Their daughter, Niki Amandala Nibbe, is a Ph.D. candidate in Public Health at UC San Francisco.

He made enormous contributions to Central American Studies. He was our friend, our colleague, and part of our family. He will be greatly missed by all of us.