The show, “Nomad World,” currently at the Stamp Gallery at the University of Maryland, includes five sculptures/installations on display through March 12. Nomad World - Beatriz Cortez - continues 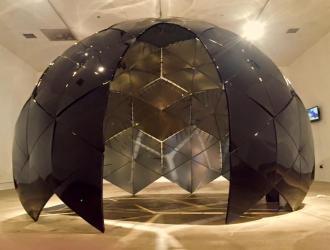 In artist Beatriz Cortez's installations, cracks and crevices are a consistent clue to the fractured existence she has experienced in her life. Cortez's work is greatly impacted by her migration from El Salvador to the United States and the civil war she endured, escaped, and left behind. "All of my friends were being murdered. There was no way I could stay," Cortez tells me as we walk through her Los Angeles area studio, which contains many versions of her flight-into-exile narrative. Her installation work "Hideout," revisits the stinging memory of hiding in a small crawlspace to avoid the whirring bullets flying past her. She re-fashions the ramshackle structure, inviting spectators to crawl inside and imagine the gestures of war rage in this now ambivalent space positioned in a gallery. Through cracks in the wall, observers can see the world through a sliver. The interrupted view is much like her own life.

She came to the U.S. in 1989, after the "final offensive" in San Salvador, a guerrilla intervention, led by the various factions united as the Frente Farabundo Martí para la Liberación Nacional, which disrupted the country's presidential elections, signaling the bloody end of the country's 12-year civil war. Article continues . . . 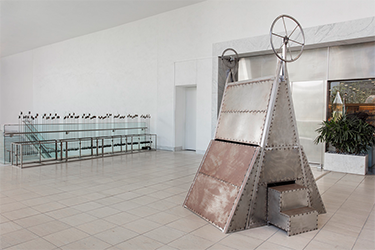 California State University, Northridge Central American studies professor Beatriz Cortez explores the immigrant experience through her art. Her latest pieces, “Tzolk’in” and “Piercing Garden,” are being showcased in the Hammer Museum’s “Made in L.A.” biennial exhibition.

The Hammer is known for its artist-centric and progressive array of exhibitions and public programs in the Los Angeles area.

“It is one of the most important things that has happened in my career,” Cortez said. “There has never been a Salvadoran artist featured in the ‘Made in L.A.’ biennial. This is not only important to me, but it gives a lot of visibility to the experience of Central American migration. Also, through my work I try to celebrate the ability that immigrants have to be in two places at once.” Article continues on CSUN Today. . .