Welcome to the Asian American Studies Department’s inaugural edition of our Alumni Newsletter. Founded in 1990, AAS is a vibrant multidisciplinary department that offers a major and minor in Asian American Studies. Many AAS graduates work in a number of diverse fields, including education, entertainment, journalism, social work, community service, business and law. This newsletter is our way of keeping in touch with our alumni community. We will be sharing faculty and student achievements and activities, and we encourage alumni to send information they would like to share to the newsletter editor ( ). We would love to hear from you. 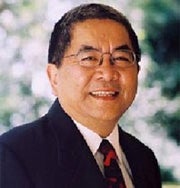 On April 30, 2009 at 5:30-7:30 p.m. in the Grand Salon, AAS will host its Distinguished Lecturer and Student Awards ceremony. The keynote speaker will be Dr. Kenyon Chan, the first AAS Department Chair. The event will celebrate the 50th anniversary of CSUN and the 19th anniversary of CSUN’s Asian American Studies Department. Dr. Chan will speak on the history of Asian American Studies, from its national inception in the Civil Rights Movement to its institutional realization as a profession, to its local creation in Northridge—in the form of the Asian American Studies Department. Dr. Chan was an active participant in all three of these areas. Faculty, students, alumni, and the general public are invited to attend this free lecture.

Dr. Chan received his doctorate in educational psychology from UCLA in 1974. He served on the faculty of UCLA’s School of Education from 1973-1980 and then served on the clinical faculty of UCLA’s School of Medicine and Santa Monica Hospital Medical Center from 1983-1990. From 1990-1998, he served as the founding chair of CSUN’s Asian American Studies Department, which, when it was founded in 1990, was one of the few Asian American Studies Departments in the entire nation. He also served as a former president of the Association for Asian American Studies. After his tenure at CSUN, he went on to serve as Dean of the College of Arts and Sciences at LMU, and Vice President and then Acting President of Occidental College. He now serves as Chancellor of University of Washington, Bothell. His research has centered upon the effects of race on the emotional and social development of children. He is currently conducting research on social and higher education policy.

During the fall of 2008, Karin Anna Cheung, CSUN alumna, was a distinguished guest speaker at the first “Asian American Studies Mixer.” Addressing a large crowd of students, she proudly shared her experiences as a former student of Asian American Studies, and how she brought her AAS background into her professional life.

Karin graduated from CSUN in 1998 with a degree in art. During her undergraduate years she was an active member of student clubs like the Asian American Christian Fellowship and the Filipino American Student Association. And though an AAS major was not established until a year after her graduation, Karin actively supported and enrolled in a variety of classes taught by former Department Chair Kenyon Chan and Professor Gordon Nakagawa.

Karin maintained her awareness of Asian American community issues as she ventured into the career world. Though Karin has made a name for herself as a visual artist, singer, and theater performer, she is best known for her work in film. Karin was the lead actress in Justin Lin’s Better Luck Tomorrow (nicknamed “BLT”), an independent sleeper hit acquired and distributed by MTV and Paramount Pictures. After winning acclaim in the illustrious Sundance Film Festival and the 2002 Independent Spirit Awards, “BLT” garnered widespread attention from mainstream filmgoing audiences. Roger Ebert notably gave the film a four-star rating, hailing it as a “disturbing and skillfully-told parable about growing up in today’s America,” while noting that Karin’s performance “hit the right notes” and, thereby, carried the story.

Karin’s paintings and visual displays have been featured in a variety of prominent galleries including the API-owned Lost Souls Café in downtown Los Angeles, while her stage performances have ranged from dramatic theatre to sketch comedy, most recently with the Projekt Newspeak troupe. Ever conscious of stereotypes and the need to represent deeper and more complex character portraits of API women, Karin is wary of the travails of celebrity life and chooses her creative projects carefully.

Karin recently starred in Quentin Lee’s The People I’ve Slept With. The film, set for a 2009 release, is a coming-of-age comedy based upon the life and times of Angela, played by Karin. Angela, like other characters Karin has played, is exuberant, witty, and complex, much unlike more mainstream conventions of young API women as docile “lotus blossoms” bereft of agency.

Karin was a featured singer at President Barack Obama’s inauguration on January 20th.

In the spring and summer of 2008, Professor Gina Masequesmay visited Vietnam for five months during her sabbatical leave. While there, she

Her original purpose was to carry out research on lesbian and queer female communities in Vietnam. However, since the Vietnamese government does not officially recognize their existence (and considers them a societal ill), this community is understandably very closeted.  Consequently, she did not have sufficient time to develop the trust needed to conduct the in-depth interviews necessary for a full-scale, research project. 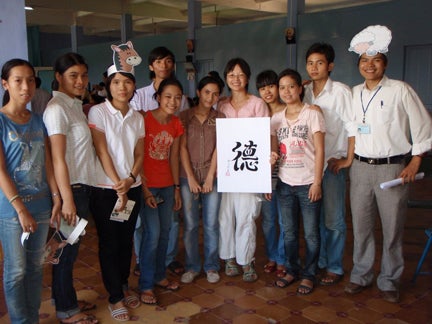 For this reason she changed her focus to humanitarian work.  Specifically, she worked for her aunt who runs Fund for Vietnam, which distributes food, clothes and scholarships to the poor and disabled. She also worked for Maison Chance, which works primarily with disabled people and orphans.

There she helped to develop a curriculum (34 lessons) for their English class. She also volunteered at an NGO, Education for the Poor, working with the Catholic Church in Hue to teach English to the poor for five weeks.

Professor Masequesmay especially wants to share this experience because others can also volunteer to teach in this program, which is affiliated with the Catholic archdiocese in Hue in central Vietnam. Typically sharing rooms, volunteers are housed either at a monastery or in a hotel, and meals are provided by the priest in charge. Volunteers are required to spend five hours a day, from Monday to Friday, teaching English to students; however, they are free to engage in extracurricular activities outside of class
time. There are sets of books, audio lessons, and references available for the different levels. Students range in age from 8 to 72 years old, and include traditional students as well as priests who want to practice their English. On weekends, there are usually scheduled field trips, or students will invite the volunteers to explore Hue. The program provides the volunteers with room and board and even a small stipend for extra expenses. Aside from the teaching obligation, volunteers also need to buy their airfare over to Hue where they will be picked up and dropped off at the airport. Overall, it is a great opportunity to help students in need and to explore Hue. If you are interested in additional information, feel free to contact Professor Gina Masequesmay (gina.masequesmay@csun.edu) or the organization itself (www.educationforthepoor.org).

Professor Masequesmay plans to create a slideshow presentation of what she learned from these humanitarian trips and to discuss how these NGOs function in a communist system that, like the previous corrupt government that it fought to replace, fails to fulfill its commitment to the proletariat.