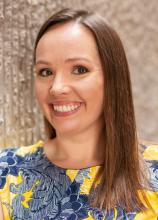 Alesha Claveria will join the American Indian Studies Program at CSUN in August as an assistant professor in Fall 2022.

“The Search and Screen Committee was impressed with her enthusiasm for making a difference in the lives of students and the Native community,” said Scott Andrews, director for AIS. “Her academic interests in American Indian theater, religion, and gender studies will help American Indian Studies contribute to other departments and programs.”

Claveria said, “Joining the faculty at CSUN is an exciting and humbling opportunity. It is so rewarding to work cooperatively with students to support their campus life, academics, and life journeys. Being able to learn from all the people at CSUN—honoring the wisdom they bring into university spaces from their lives and home communities—will undoubtedly shape and enrich my work as an instructor, theater maker, and community servant."

Her doctoral dissertation at UC Santa Barbara is titled Staging the Sacred: Corporeal Sovereignty, Survivability, and Salient Humor in Contemporary Native North American Drama and Performance, 1972-2022. In support of that, she received a Ford Foundation Dissertation Fellowship in 2021.

Claveria has made presentations at a variety of academic conferences, including the American Literature Association, the American Academy of Religion, and the International Society for the Study of Religion, Nature, and Culture. She was accepted to present at the Native American and Indigenous Studies Association, but that event canceled due to COVID.

For several years, she has been active with administration and programming for the American Indian and Indigenous Collective in Santa Barbara. Her community involvement has included being the artistic director in 2016 and 2018 for the Teatro Tour Troupe, which involved young people in the Santa Barbara area in activist theater performances.

While at UC Santa Barbara, Claveria has worked with members of the Chumash community. She said she looks forward to continuing that relationship while at CSUN and building new ties with the Fernandeno Tataviam Band of Mission Indians and the Tongva community.

In the fall semester, Claveria will teach two sections of AIS 101 Introduction to American Indian Studies and a section of ENGL 310 Playwriting.