As an advocate fighting against infant and maternal mortality, particularly among black populations, Kacie Blackman has dedicated most of her research to lactation resources, policies for maternal health and maternity support resources.

“We’re fortunate to live in America, [but] we spend so much on healthcare, and it’s just ridiculous how much people are dying [and lack] access to affordable quality care,” Blackman said. Blackman received her bachelor’s degree in Human Performance, with a minor in Chemistry, from Howard University. She also received her doctorate degree in Human Nutrition, Foods, and Exercise from Virginia Tech.

Currently, Blackman is one of the faculty cluster hires at the Health Equity Research and Education (HERE) Center and is an assistant professor in health sciences at California State University, Northridge.

Blackman also serves as principal investigator for the HOMME Lab, or the Health Opportunities Mobile Health in Mamas and Equity. According to their website, the lab researches the socio-ecological framework that influences a mother’s perceptions and roles on breastfeeding, at the individual, relationship, community and policy level including examining ways to reduce infant feeding disparities.

Most of her research focuses on maternal health and access to maternal health resources. “We looked at how the social ecological model influences lactation for the actual individual and their baby,” Blackman said. 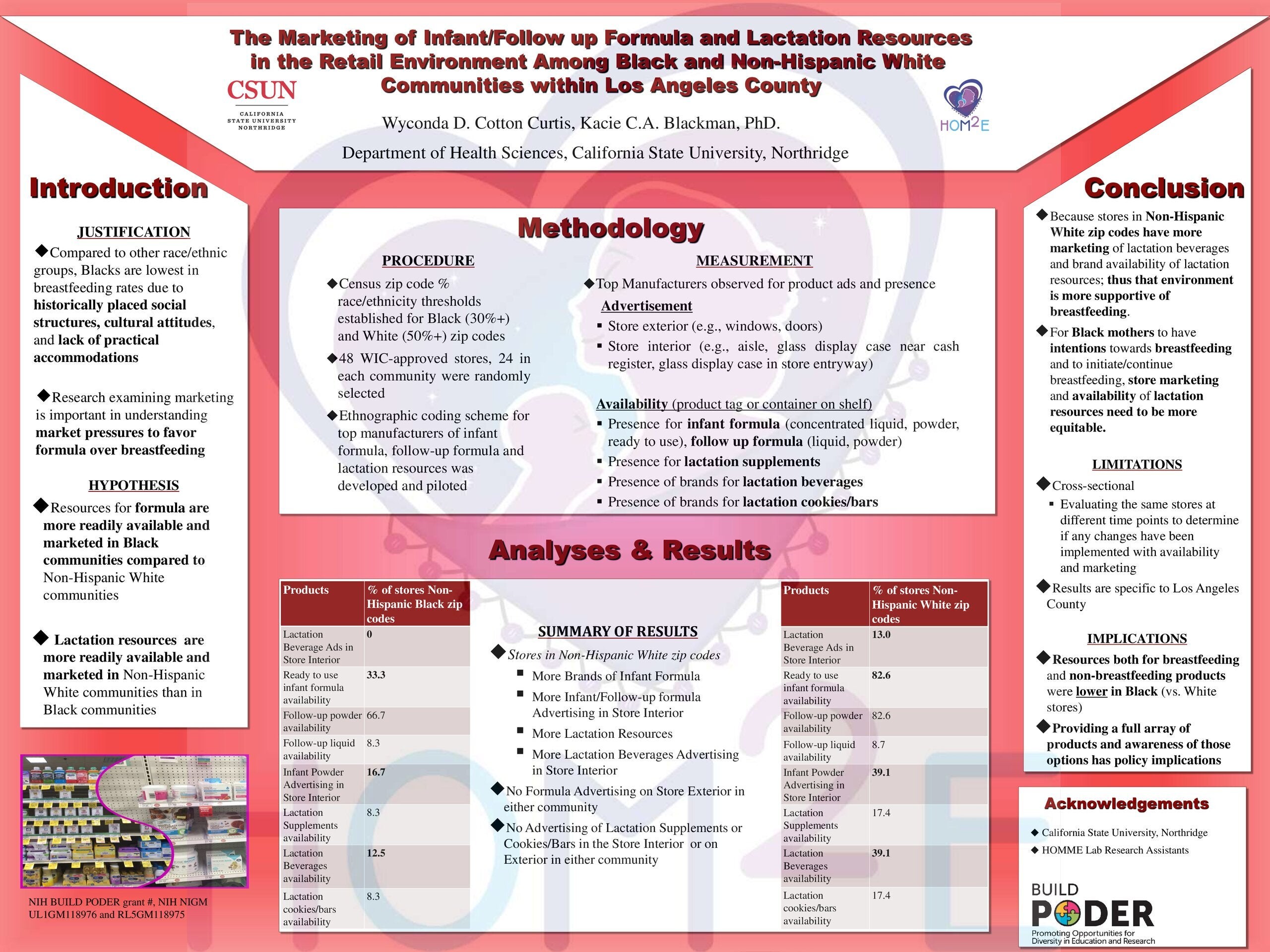 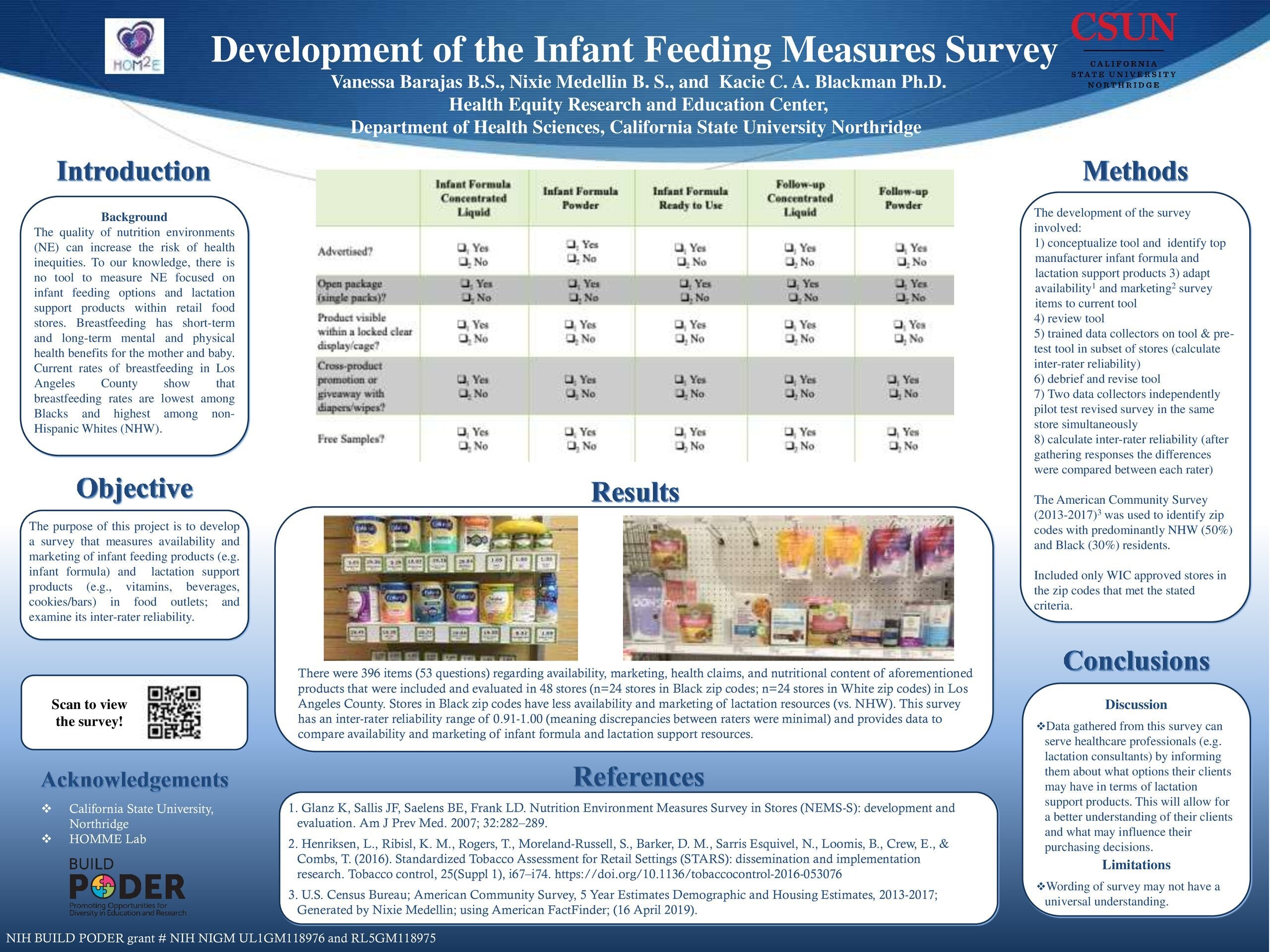 From the policy level, Blackman looked at on-campus lactation protections for students, faculty and staff across California. She found that there were only policies for on-campus employees and not for the students.

“[It] is critical to be able to have policies and protections for students, primarily for parenting students, because they shouldn’t have to make a choice between whether they’re going to breastfeed their child or finish academics,” Blackman said. “They should be able to do both.” Another project Blackman worked on was comparing lactation resources between black populations and white populations. To do this, she observed stores from predominantly black zip codes and predominantly white zip codes.

“What we found was that black stores had very minimal of anything in terms of formula, feeding or even lactation support resources,” she said. “By that, I mean vitamins and teas that can help you with milk production.”

According to Blackman, evaluating breastfeeding resources is important because it shows how people would be able to follow the breastfeeding guidelines given by the American Academy of Pediatrics.

Her other projects include an augmented reality application to motivate mothers to breastfeed and a project looking at how racism plays a role on physiological stress through analyzing black doulas’ and white doulas’ saliva samples.

“We really need to see that [black doulas] may be a vulnerable population,” Blackman said. “If [the doulas] are not well, then we could potentially see negative birthing outcomes, so we would need to make sure that the birth equity workers, in this case, doulas, are doing well.”

According to Blackman, her experience with the HERE Center has been positive amazing. When she first got to CSUN, she started out as a cluster hire at the center, and she was able to witness and be a part of the center’s development.

“It was really cool being able to help with the bylaws and the constitution and all [the] things that go into creating a center that I wouldn’t [normally] have had an opportunity to do, especially as a new hire,” Blackman said. “[The HERE Center] has been a great resource, and I’m excited for the different opportunities that the HERE Center has going.” 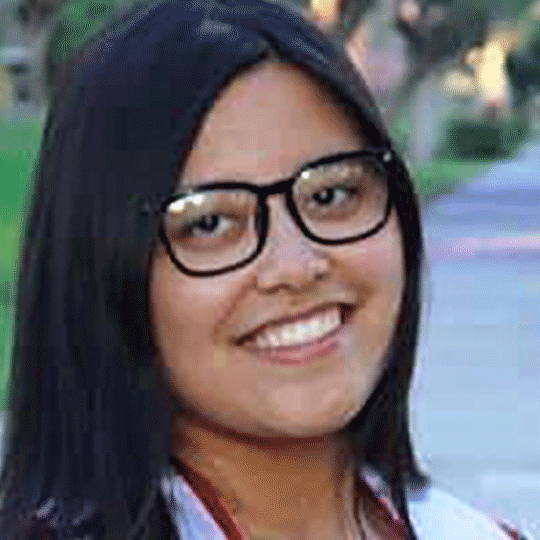