Bachelor of Science in Nursing student Lorena Gonzalez was among eight graduates featured recently in CSUN Today.  Lorena teared up as she recalled the first day she arrived at Dodger Stadium to help administer COVID-19 vaccinations. "I knew I had made the right choice in becoming a nurse," she said.

The story below is part of a larger CSUN Today feature which highlights students from throughout campus.  Read the whole story and see all the videos in CSUN Today. 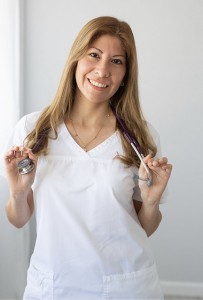 Lorena Gonzalez, 38, of Northridge, teared up as she recalled the first day she arrived at Dodger Stadium to help give COVID-19 vaccine shots. “It was so impressive to see how many people were there, how many of us nurses were able to come together and give hope to the community,” she said. “I knew I had made the right choice in becoming a nurse. I had done all this studying, all this education, and it was useful. I could help people.”

The fact that Gonzalez is bilingual made her work even more impactful. “We had a lot of Spanish-speaking people who were afraid, who didn’t know if getting a vaccine shot was the right thing to do,” she said. “But seeing someone who looked like them, who spoke their language, meant they could open up and ask questions. You could see it in their eyes, that they knew that there was someone there that they could trust.”

Gonzalez moved to the United States from Argentina when she was in her late teens, following an older sister who had moved to the Los Angeles area years before. “I used to come here only for vacation and I really liked being here,” she said. “I saw that there were a lot of opportunities, so I decided to move here.”

Upon arrival, she threw herself into her education. She took English classes and earned an American high school diploma before she enrolled at a community college to begin her nursing studies. Her grandmother had been a nurse, and Gonzalez loved to hear her stories about helping patients.

She initially became a certified nurse assistant, but she wanted to do more. She enrolled in the ADN-BSN Community College Collaborative Program at College of the Canyons, which allows nursing students to begin their education at a community college — earning an associate degree in the process — before completing their bachelor’s degree in nursing at CSUN. The entire process takes only three years.

“I knew it was going to be challenging,” she said. “There were a lot of hours of studying. I did my clinical training in a number of hospitals in a variety of communities, with different cultures and socioeconomic status. Throughout it all, my professors always encouraged and supported me.”

The pandemic hit just as Gonzalez was finishing up the clinical training portion of her degree. Realizing that healthcare workers would soon be overwhelmed, Gonzalez and her classmates immediately volunteered to administer COVID-19 tests and, when they became available, vaccines. She would put in long hours out in the field, and then return home, turn on her computer and attend class.

“It was hard to figure out how Zoom worked, figure out how to take exams and communicate with your professors, but we made it work,” she said. Gonzalez already has a job with an agency that sets up mobile vaccination clinics in underserved communities. She would eventually like to become a surgical nurse.

In the meantime, she said, “I am putting what I learned in the classroom to use, helping the community. I’m a nurse and I need to be where the community needs me.”

Read the whole story and see all the videos in CSUN Today.