Under the supervision of Dr. Furtado, five undergraduate students from the Kinesiology Department presented the results of two research projects at the 60th Western Society for Kinesiology and Wellness Annual Conference. The conference was held in Reno, NV (October 7-9, 2015). 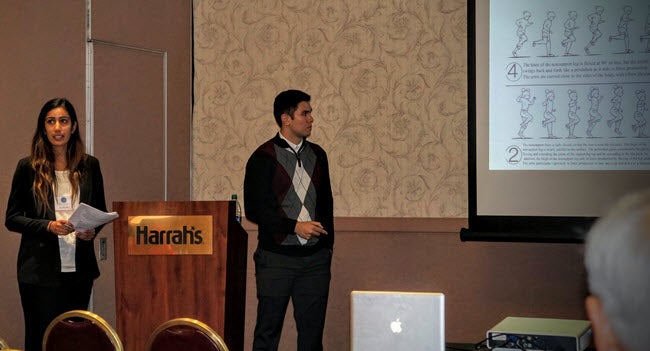 BACKGROUND: Teachers and practitioners working with younger children must conduct regular assessments to gather evidence about the student's level of achievement in fundamental movement skill (FMS) development (e.g., skipping, throwing, etc.). However, assessment tools designed to test FMSs require teachers to videotape performances for later analysis. This practice poses a problem for the teacher considering the time available for assessment and the number of students per class. PURPOSE: This study aimed to evaluate the reliability of classification decisions for a new method of assessing the qualitative aspects of FMS competence in children by comparing agreement between an expert rater and 29 trained undergraduate kinesiology students. The method proposed in this study will allow teachers to conduct live assessments without the need to videotape students. SIGNIFICANCE: The significance of this project is twofold. First, it will allow teachers to engage in regular assessments of students. By conducting assessments regularly, teachers will have the opportunity to detect problems regarding fundamental movement skill development. Abnormal FMS development has been linked to unwanted levels of obesity and low levels of physical activity participation among children and adolescents. Second, this method will allow instructors at the college level to provide more opportunities for students who are pursuing teaching certification in elementary education to practice assessing fundamental movement skill performance. METHODS: Participants were 29 undergraduate students enrolled in a kinesiology program. Participants used adapted versions of validated developmental sequences to classify 24 videos of children performing the skills of hopping and striking with a bat. Fundamental movement skill developmental sequences are comprised of pictorial configurations and written performance criteria of the skill. During training, participants relied on both the pictorial configurations and the written performance criteria to classify 8 videos per skill; while during testing, participants relied only on the pictorial configurations to classify 12 videos per each skill. During training, participants received feedback from the test administrator. Subjects were tested 48 hours after the training session with no feedback given. Participant's ratings were compared with those of an expert rater. RESULTS: The weighted kappa values indicate that agreement was considered "very good" for hopping (kw=.88, SE= .018) and "good" for batting (kw=.80, SE= .033). CONCLUSION: The current study served as the foundation for the development of a new assessment tool designed to test fundamental movement skill competency in children.

BACKGROUND: Fundamental movement skills (FMS) are considered the foundation for the performance of specialized skills (e.g., basketball layup). Fundamental movement skill competency has been linked to decreased levels of obesity and increased levels of physical activity/sport participation. To be active, children need to acquire fundamental motor skills; and therefore, FMS assessment is crucial. The FG-COMPASS is a process-oriented and criterion-referenced instrument that evaluates FMS development in children ages 5 to 10 years. Previous studies (Furtado, 2004; Furtado & Gallagher, 2012) have provided initial evidence of validity and reliability for the FG-COMPASS. PURPOSE: To collect inter and intra-rater reliability for the FG-COMPASS from video performances. METHODS: Independent ratings from three observers were used to examine inter-rater reliability. Observers classified 96 video-clips, which depicted children performing 8 motor skills. Intra-rater reliability was examined by comparing the ratings from two-time occasions, one week apart. The weighted kappa (Fleiss, 1981) was used as the index of agreement. The kappa values were compared to Altman's (1991) criteria (equal or less than .20 = "poor"; .21 - .40 = "fair"; .41-.60 = moderate; .61-.80 = "good"; and .81-1.00 = "very good"). The current study established a kappa value of .61 or higher as an adequate level of observer agreement. RESULTS: Inter-rater agreement was considered "very good" for the locomotor (kw = .91) and manipulative (kw = .92) subscales. Intra-rater reliability agreement was also considered "very good" for the locomotor (kw = .89) and manipulative (kw = .91) subscales. CONCLUSION: This study provided further inter/intra-rater reliability for the FG-COMPASS when assessing video performances. The next step is to collect reliability evidence when assessing live performances.