We are pleased to introduce you to the inaugural group of Health and Human Development College Scholars for 2019-2020.

The HHD College Scholar distinction is one of great significance and will be acknowledged at the University Honors Ceremony.

We in the College are proud of these exemplary students. Please join us in congratulating them on a job well done! 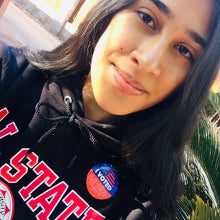 Melanie Giron is a senior who will graduate this Spring of 2020 from the Department of Child and Adolescent Development in the Applied Developmental Science option. She told us that when she began her journey here at California State University, Northridge in Fall 2016, she did not have the intention of majoring in Child & Adolescent Development but instead planned on pursuing a major in Nutrition and Dietetics.

She knew she wanted to be a helping professional and becoming a Nutritionist was how she thought she could reach that goal. Despite her interest in food and nutrition, by the end of her freshman year, her aspiration to become a Nutritionist was no longer there. In a time of questioning and uncertainty, Melanie visited her academic advisor, Neddie Garcia, and together they explored other areas of interest. Her advisor recommended she enroll in an introductory child development class as well as the Child and Adolescent Development Profession class during her second year of college since Melanie showed interest in being a helping professional. It was in those classes that Melanie grew a passion for the field of Child Development and found her true calling for school counseling. Her academic advisors as well as the support from the Educational Opportunity Programs (EOP) community were influential in promoting Melanie’s college success.

As an undergraduate at CSUN, Melanie had the opportunity to work and interact with outstanding faculty members in the Department of Child and Adolescent Development. Melanie worked with Dr. Virginia Huynh as a peer mentor for the Social Development class (CADV 352). It was in this position that she gained a greater passion for helping students succeed academically.  Melanie said that Dr. Huynh was also a great mentor because she provided her with constructive feedback that guided her growth. Melanie added that she also benefited from her interactions with Dr. Rika Meyer and Dr. Joyce Marie Brusasco (FCS) and that they were both very supportive and contributed to her overall academic and personal growth.

After graduation Melanie hopes to continue her education and obtain a Master’s degree in School Counseling. Her goal is to become a high school counselor and advocate for young people and their rights to an equal opportunity for academic and personal achievement. 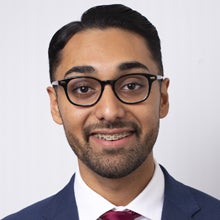 In addition to being selected as a College Scholar for the College of Health and Human Development, Omar Ullah was selected from nominees across all CSUN Colleges to be named the CSUN Wolfson Scholar for 2019-2020.

Omar Ullah told us that growing up amidst the unforgiving landscape of the Mojave Desert, he witnessed his working-class, immigrant parents and members of his rural community struggle to obtain basic healthcare services due to barriers of access and affordability. These formative experiences, coupled with the strong mentorship of CSUN faculty, ignited his fierce spirit of activism and galvanized his life's mission to both reduce health disparities among historically under-served communities, and help lead the fight to transform the US healthcare system into one that guarantees high-quality, affordable coverage to all Americans. This rewarding path has led Omar to become a driven, ambitious pre-medical college student, award-winning biomedical researcher and scholar under the National Institutes of Health (NIH), an endowed fellow with the National Environmental Public Health Internship Program (NEPHIP) through the Centers for Disease Control and Prevention (CDC), and a research fellow in US healthcare policy at Harvard University.

Key to his belief in healthcare as a human right, Omar aims to become a primary care physician in order to return to his rural hometown to bring medicine to those without a doctor by establishing a world-class, culturally informed Federally Qualified Health Center (FQHC) to provide free and sliding-scale medical care for uninsured, undocumented, and homeless residents. Furthermore, Omar aims to target the root causes of inequities by emerging as an eminent voice in policy-making and health disparities research. Consequently, he intends to run for a seat in the US Congress in order to promulgate robust, evidence-based policies––steeped in social justice––that protect and empower rural and under-served communities of color, as well as revolutionize the US healthcare system.

Above all, Omar aims to spend a lifetime elevating the voices of the voiceless, living intentionally, and learning for the sake of others. 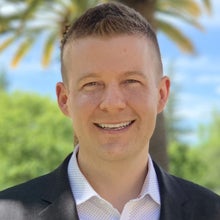 Brian Mitchell is a senior majoring in Family and Consumer Sciences with an emphasis in Nutrition, Dietetics and Food Science. He told us that because of his own personal struggle to maintain a healthy weight throughout his life, he has decided to commit his career to offering compassionate medical nutrition therapy to patients hoping to make meaningful lifestyle changes.

As an undergraduate student, he has participated in community based research, including the Reinventing Integrative Cooking Opportunities (RICO) project, an organization committed to serving teens at risk for gang violence. Brian is part of the RICO team developing nutrition curriculum, leading cooking workshops, and assisting with the collection of field research data to measure the impact of the program. Through mentoring and teaching practical cooking skills, Brian is helping to improve the health trajectory of disadvantaged youth by encouraging the pursuit of higher education and disseminating nutrition knowledge that can be applied and shared in their homes and community.

As the culinary lead of the CSUN Pop-Up Pantry, Brian contributes to a team that is combating food insecurity and food waste by reclaiming fresh produce that would otherwise be discarded and redirecting it to feed CSUN students. He has also served in numerous leadership positions within various campus organizations. Upon completion of his bachelor’s degree from CSUN, Brian will begin the Masters Entry Clinical Nurse program at UCLA, a highly competitive nursing program focused on social justice and reducing health disparities for under-served populations. Brian said his ultimate goal is to become a Nurse Practitioner focusing on integrative medical approaches to reverse common preventable metabolic diseases. Brian adds that with so many opportunities available to be of service, he is excited to continue expanding his personal and academic endeavors. 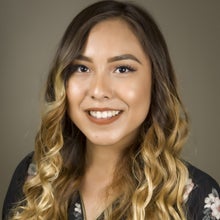 Diana Moran is a first-generation public health and pre-nursing student who told us that she strives to bring advocacy for chronic diseases and help vulnerable populations achieve health equity. Living in a low-income community and being surrounded by individuals with life-threatening diseases, Diana has been able to recognize the importance of eliminating health disparities in order to reduce the prevalence of chronic diseases. It is with this passion that she has fully immersed herself into helping others improve their quality of life during her undergraduate studies.

Throughout her years at CSUN, Diana has exemplified academic excellence and exceptional community service. Her academic diligence has allowed her to finish her undergraduate degree in three years, all while maintaining a 4.0 GPA. Diana has also previously received the Holly Hunt Public Health Scholarship and the Public Health Academic Distinction Award, both awarded by the Department of Health Sciences.

On campus, Diana has served as the President of the Health Education Student Organization, where she has led students with health promotion efforts for diabetes, mental health, HIV/AIDS, and other health issues. Diana has also previously served as a Peer Health Educator with Peer Health Exchange, providing the sole source of health education to 9th graders from low-income communities. In addition, she has served as a volunteer for the Klotz Student Health Center, by taking the vital signs of patients.

While volunteering for these on-campus organizations, Diana has also volunteered at Northeast Valley Health Corporation, assisting staff with quality improvement tasks for health issues such as diabetes, cancer, and asthma. Diana has also promoted mental health awareness within the University Student Union, by providing a workshop on the topic and leading a meditation session for over 100 employees.

Diana’s passion to help others with their health is limitless and one in which she will continue to pursue as she continues her education. Diana is eternally grateful for the education and opportunities provided to her by all of the faculty and staff at the College of Health and Human Development. She told us she is also thankful for her family who provides her with unlimited support. As she makes her way into becoming a health professional, she hopes to one day be able to give back to all of the communities that have shaped her. 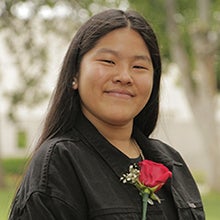 Tammy Rassamekiarttisak is a graduating senior finishing her undergraduate career with a Bachelor of Science in Public Health and Bachelor of the Arts in Asian American Studies. Tammy said that during her time at California State University, Northridge, she was involved with the Asian American Studies Pathways Project, Associated Students, CSUN Vietnamese Student Association, Educational Policies Committee, New Student Orientation, and the University Student Union. She told us that although it can sometimes be difficult to balance her academic life with her personal one, she believes that she should give back to the community and remember her roots.

For the future, Tammy plans to complete her prerequisites for medical school and apply for medical school to become a pediatrician. Tammy believes that her work at CSUN and the time and effort that she put into helping change the campus and advocating for students’ needs and for their voices to be heard shows her dedication to her community. Although there are many barriers and legislation that might make things difficult for her community to advocate for the things that they need, Tammy believes that we are moving in the right direction and that we need informed leaders to help with those changes. No action is too small and that everyone can make a difference. 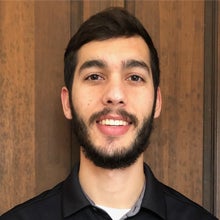 Daniel Delgado is working toward his Bachelor of Science in Athletic Training.  He told us that he has worked closely with Athletic Training faculty Sean Rogers on many projects over the last two years.

Following graduation from CSUN, Daniel plans to pursue a clinical Doctorate in Athletic Training (DAT) from Indiana State University. He said that in addition to the doctoral program, he has been given a graduate assistant position through Franciscan Health to work as an athletic trainer with under-served populations at a high school and middle school in Indiana. After completing the doctoral degree, Daniel wants to pursue a career as an athletic trainer in the NFL.

When asked "What insights or experiences did you get from your time at CSUN that you might not have expected?" Daniel responded that, "The greatest experience I received from my time at CSUN was my athletic training summer internship with the Los Angeles Rams. CSUN’s Head Athletic Trainer, Steve Grech, is also a Spotter for the NFL. He is assigned to the Rams for all home games. After spending some time working with him at CSUN, he contacted me one day explaining that the Rams were in need of a summer intern and they contacted him for a recommendation. He decided to recommend me for the position which I obtained shortly thereafter. During the internship, I was able to see what athletic training looks like at the professional ranks as well as travel with the team. Some of the places I traveled were Oakland for a preseason game against the Raiders and Hawaii for another preseason game, this time against the Cowboys."

Daniel added that he is the fourth and youngest child in his family and that his mother and one of his older brothers also attended CSUN.