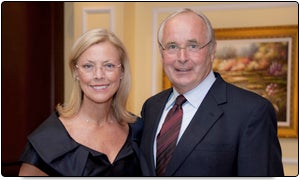 Kershaw Captures Campanella Award; Dodgers Make CSUN Donation
Los Angeles Dodgers pitcher Clayton Kershaw—currently considered the best pitcher in Major League Baseball as a three-time All-Star and Cy Young award winner—is as much a winner off the field as he is on it. His humanitarian work is legendary, and that’s one of the reasons he was chosen as this year’s recipient of the Dodger’s Roy Campanella Award, which also also makes winners of the physical therapy students at California State University, Northridge. Read more about the Campanella Award.

Argyle Partners and Kingston Foundation Set Trend With Fashion and Design Scholarships
In the academic world of fashion, design and merchandising, tuition can be an extra concern for students already facing the difficult task of making a name for themselves in a competitive industry. However, thanks to gifts of $1,000 from both the Joy Kingston Foundation and Argyle Partners, three California State University, Northridge seniors have been awarded scholarships that will allow them to focus on their dreams of creating the next biggest fashion craze. Read more about the Fashion and Design Scholarships.

Video: CSUN and Dodgers Partner in Internship Program
For 20 years, the family of Dodgers great Roy Campanella has supported physical therapy scholarships at CSUN. In 2010, the Dodgers Dream Foundation decided to expand Campanella’s legacy by placing CSUN physical therapy students in internships with the Dodgers. Read more about the CSUN and Dodgers Internship Program.

Alumnus Launches $500,000 Challenge Grant for the College of Business and Economics
Paul Jennings ’85 (Marketing), one of California State University, Northridge’s most illustrious and philanthropic graduates, has announced a $500,000 challenge grant for the CSUN College of Business and Economics. For every dollar donated to the college, Jennings will match the contributions one-to-one, giving the college an unprecedented opportunity to raise $1 million. Read more about the Challenge Grant.

University Neighbors Give Back to the CSUN Center of Achievement
On the morning of Jan. 26, 2005, Bob Janovici was on his way to work, riding a Metrolink train from his home in Northridge to his office in downtown L.A. At 6:03 a.m., an abandoned SUV left on the tracks caused a major derailment of his train, leaving 11 people dead and Bob in a coma with a broken neck and a severe brain injury. Although doctors told his wife, Sue, that Bob had only a 1 percent chance of regaining consciousness, fortunately he did. He then started the slow process of recovering. Read more about the University Neighbors Give Back.

Ruth Rothman: Continuing a Legacy of Giving
Ruth Rothman’s indomitable spirit came from a lineage of overcoming the odds. At 13, her mother led her extended family out of Russia and negotiated their way to the United States. Her parents made a habit of helping people—family members and strangers alike—get through the Depression. As she said, “They taught us to be involved.” Read more about Ruth Rothman.

A Three-Generation CSUN Family Honors Mother With an Endowed Scholarship
When Myrna Vallens passed away in 2011, her children knew they had to do something special to honor her passion for education. Read more about the Myrna Vallens Scholarship Endowment.

CSUN Student and Business Owner Gives Back with Annual Scholarship
Alan Campos isn’t a typical CSUN undergrad. In addition to taking a full course load as a business major, Campos also owns SCV iRepair, a successful small business that offers repair services for iPhones, iPods and other mobile Apple products. Besides being a student and an entrepreneur, Campos is now adding another moniker for himself: philanthropist. Read more about the Alan Campos Dream Big Scholarship.