This spring, 1,520 students are graduating from CSUN’s Mike Curb College of Arts, Media, and Communication, joining nearly 10,000 CSUN students earning their degrees this year. One Curb College graduating senior, Anoushiravan Saboktakin, has an extra reason to celebrate. He has been awarded the Ravi K. and Amalia Sawhney Creative Excellence Award—a cash award of $10,000 recognizing and celebrating his creative achievements and professional promise as a graduating senior in the Curb College. 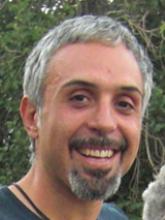 Graduating senior and award winner Anoushiravan Saboktakin
CSUN alumnus and noted industrial designer Ravi K. Sawhney ’78 (Art Three Dimension) and his wife, Amalia, created the annual award with a donation to CSUN in order to help launch the professional career of an outstanding graduate. Earning a bachelor’s of music with highest honors, Saboktakin is already an accomplished commercial music composer. He has written compositions for several films, traveled to his native Iran to study the ethnic music of Kurdistan and Khorasan and completed an internship with TV and film composer John Frizzell.

Saboktakin is even missing his own graduation ceremony because he is in Iran securing a new feature film project. His five-year career plan includes continuing to score films, teaching music, developing a music licensing library and establishing a production company that encompasses music and sound design.

With Saboktakin’s award comes a commitment to speak in front of Curb College classes in 2014 and 2015. With his experience, his plans and the boost of the Sawhney Award, Saboktakin will certainly have exciting developments to share.