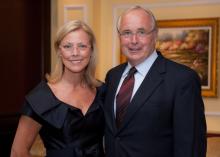 
With a recent gift to the university, California State University, Northridge President Dianne F. Harrison and her husband, John Wujack, have joined CSUN’s Heritage Society, the group that recognizes and honors CSUN alumni and friends who have made a financial commitment to CSUN's future through their estate plans.

President Harrison joins more than 140 CSUN supporters who have made planned gifts to the campus. Planned giving encompasses many types of gifts — from including CSUN in a will or living trust to leaving CSUN as a beneficiary of a retirement plan or an insurance policy It can also include life-income generating gifts like a CSUN Charitable Gift Annuity.

With her gift, President Harrison and Mr. Wujack are supporting the Dianne F. Harrison Leadership Award. This award, created by the campus community to commemorate Harrison’s investiture as president of the university in May 2013, honors a student who has completed his or her freshman year at CSUN with high academic accomplishments and a demonstrated dedication to campus leadership. Dozens of CSUN alumni, staff and community members contributed to the award’s fund to support the annual $5,000 prize, which not only financially supports deserving students but also fosters an increasing culture of leadership on campus.

While cash gifts to the university are crucial to its excellence today, planned giving lays the foundation for the university’s future, ensuring that CSUN continues to shine for generations.

“My husband, John Wujack, and I are excited to make this commitment to CSUN,” said Harrison. “I know first-hand how transformative planned gifts can be to a university and its students, and I am thrilled that a portion of our legacy will support the leadership award.”

It was especially important to Harrison to make a planned gift early in her presidency. “Planned giving is one of the most important ways for alumni and friends to support institutions they value, because it allows supporters to make sizable contributions without significant and, in some cases, any impact on their current financial situation,” said Harrison. “I hope that many members of the CSUN community will also consider this way to contribute to CSUN."