For students wanting to experience life in one of the world’s most populated and fascinating countries, at no cost to them, California State University, Northridge has an option. The China Scholarship Council (CSC) provides students with funding to live and study for a full year in China. Funded by the Chinese government, the awards cover tuition as well as living expenses, giving CSUN graduate and undergraduate students from any discipline the opportunity to experience life in China. 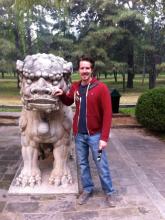 Brandon Violette posing next to a lion statue along the Sacred Way, which leads to Beijing’s Ming Tombs.
This year, seven CSUN students and alumni received this prestigious award. Most described their experience in China as life-changing, with opportunities for developing skills and opening new doors to careers.

Brandon Violette ’13 (Cinema-Screenwriting), currently studying at the Beijing Film Academy, says the skills he’s gained in China can only be learned through experience.

“I’ve literally packed my life into two suitcases and made that blind leap to a foreign country to start over, make a few friends and see walks of life I’d only read about,” said Violette. “Once you go through that, with all the excitement and anxieties that go with it, it humbles you. It reminds you that you’re not at the center of the world like you once thought you were.”

Violette encourages every student to apply to the China Scholarship Council program regardless of their field of study. “It’s a tremendous opportunity that I still can’t believe is out there for people to grab,” he said. 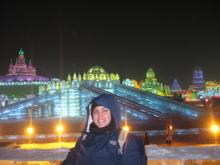 Danielle Cabello ’05 (English) said one thing will carry on for the rest of her life from her experience is the importance to step out of your comfort zone. Cabello loved her experience in China so much that she decided to stay and teach English.

“After my scholarship was finished, I realized I didn’t want to leave China right away because I felt that one year simply wasn’t enough to really get to see and learn about such a vast country,” she said. “Now, four years later, I’m still in China studying for a master’s degree at Tsinghua University and plan on staying here for a few years after graduation to teach.”

Recipient Spencer Goad believes that the opportunity of living in China was the key to his continuing career.

After leaving CSUN, Spencer Goad ’09 (Music Performance-Percussion) earned his master’s at Arizona State University and began working as a college professor teaching music history in Phoenix. Goad applied to CSC and was accepted into Shanghai Conservatory of Music for one year as a visiting senior scholar.

Goad believes that the opportunity of living in China was the key to his continuing career as a college educator. “There is a whole other world outside of Southern California, the United States and the Western world little bubble we live in. [You have to] keep an open mind and be eager to learn or you will miss out on many wonderful things,” he said.

Andrew Javidi ’12 (Political Science-Government and Politics) believes studying in China has given him insight and knowledge for his future career and helped him focus on his interests in diplomacy and international relations. Studying Contemporary Chinese at Renmin University of China in Beijing has made him realize how central China is to international politics, the world economy and the coming century.

“Not only my studies, but the amount of news coverage, scholarly articles and media attention paid toward China just in the little over a year that I’ve been here has confirmed that this was the best decision I’ve ever made,” said Javidi.

Javidi encourages other students to pursue studies in China, especially through the China Scholarship Program. “No matter what field students want to explore, or what career path they want to follow, China will be a player for years to come, and learning about the country,” he said. “The culture and the language will prove beneficial to many people. The China Scholarship Program offers full tuition, board and a monthly living stipend; it really doesn’t get better than this.”